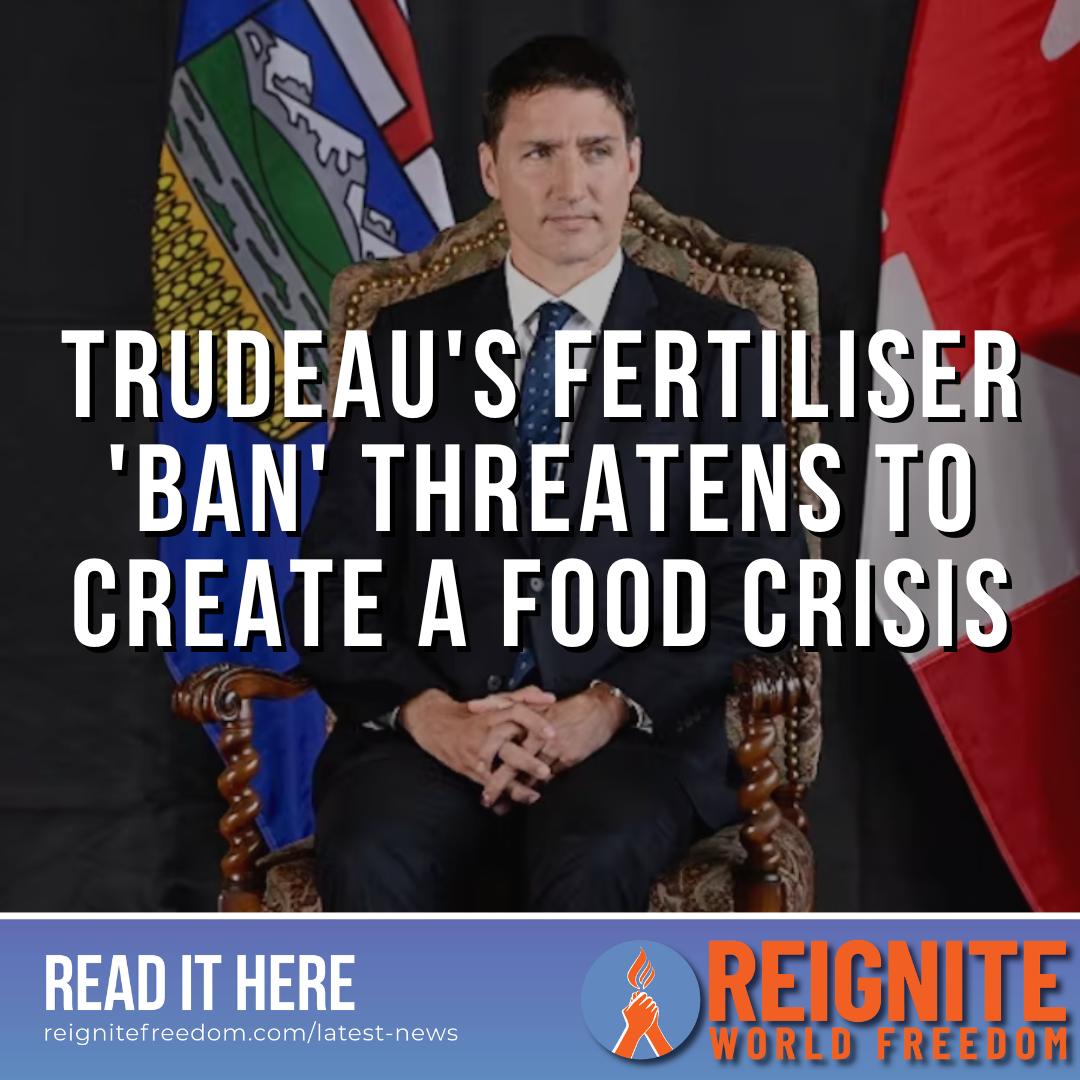 The following article from Spectator

Is the Prime Minister of Canada, Justin Trudeau, an idiot? Ordinarily I’d be more respectful of an elected leader, but this is the man who threatened Canadians over vaccine compliance, froze the bank accounts of peaceful protesters, and winked at China’s model of absolute power.

Having watched Sri Lanka’s government overthrown by starving citizens and the Netherlands grind to a halt behind furious tractors and peasants waving pitchforks – Trudeau has decided to push ahead with his fertiliser tariff and emissions reduction plan.

Provincial leaders complained bitterly about the decision at a meeting last week.

‘Western Canadian farmers already produce the most sustainable agri-food products in the world, and they’re continually being asked to do more with less. We cannot feed the growing world population with a reduction in fertiliser. Western Canadian producers base fertiliser inputs on realistic targets based on moisture availability. Producers are conservative in the use of fertiliser inputs and don’t add more than what is needed. They alone simply cannot shoulder the impact of this shortsighted policy.’

Canadians are furious with the Trudeau government, insisting that the proposed measures will cost the agricultural community billions, and that is if farmers are able to survive the drop in revenue when they are already struggling from rising fuel costs.

Soon, it will be too expensive for anyone except the largest corporations to grow food.

A report commissioned by the Western Canadian Wheat Growers put a price tag on Trudeau’s virtue, with the 30 per cent reduction on fertiliser costing Saskatchewan $4.61B, Alberta $2.95B, and Manitoba $1.58B – not in total – just for the spring crops of canola and wheat.

There are two problems facing farmers in Canada. One is Trudeau’s 30 per cent emissions target as part of the government’s climate goals, and the other is a tariff on imported fertiliser.

The latter has been dressed up as punishment for Russia’s invasion against Ukraine, where Canada’s Finance Minister, Chrystia Freeland, and their International Trade Minister, Mary Ng, introduced a 35 per cent tariff on all Russian goods.

This tariff includes nitrogen, which is a key component in fertiliser.

Instead of punishing Russia, the tariff has severely hurt Canadian farmers trying to grow food – and it has been done without the government making any serious attempt to replace the Russian market of nitrogen. Why not punish Russia by finding another supplier? Why are Canadian farmers being forced to wear the moral chains for Trudeau’s stand against Putin?

‘Why is it that Canada is the one that’s forcing our farmers to pay for the cost of the war in Ukraine?’ asked Ryan Koeslag, from Ontario Bean Growers.

Russia has established itself as a major exporter of fertiliser, providing over 80 per cent of the market in Eastern Canada, or US$365 million worth in 2021.

Knowing that conflict was a possibility – as former President Trump had warned for years – why was nothing done by the Canadian government to untangle its dependence from Russia in the vital agricultural region? Why leave food production tied to Putin’s whim? Even without the tariff, Russia could turn around and slap Canada with an export ban to which Trudeau has no Plan B.

Canadian farmers are understandably furious that they are being left with Trudeau’s bill while also being weighed down by Net Zero climate targets.

Brendan Byrne of Grain Farmers of Ontario insists that there should be some kind of government compensation for farmers forced to pay the tariff on fertiliser – which could only ever serve as a band-aid solution. It is one of many options to assist farmers. Rebates, an increase in domestic production, importing from a different country… As Koeslag says, Canada has sufficient resources in natural gas to make their own fertiliser.

G7 countries have been cautious to stay away from the topic of fertilisers when dealing with Russia. It was decided early on that tariffs, like the one introduced by Trudeau, have the habit of doing more harm to the country trying to extend the punishment. It is self-defeating – starving yourself to prove a moral point. India gave a similar defence when it refused to stop importing Russian oil and gas, asking why it should impoverish over a billion Indians while doing little to Russia in return.

‘The United States is not applying a tariff. The UK and France are not applying a tariff. Why is it that Canada is the one that’s forcing our farmers to pay for the cost of the war in Ukraine?’ asked Koeslag, who did not disagree with the need to punish Russia – just the way in which Trudeau is going about it.

Maybe the war in Russia is simply an excuse for Trudeau to wind back fertiliser?

The government’s decision to target fertiliser makes more sense if it is viewed in alignment with Canada’s fierce climate goals that follow a similar logic to those of Sri Lanka and the Netherlands where fertiliser is being attacked directly without the justification of war.

This motivation becomes more clear from a recent meeting involving provincial and federal ministers where the government explained that it is ‘looking to impose a requirement to reduce nitrous oxide emissions from fertilisers saying it is a greenhouse gas contributing to climate change’.

Trudeau’s government have admitted that their 30 per cent reduction in emissions for agriculture (which was meant to be voluntary) cannot be achieved without putting restrictions on fertiliser use. This way, Trudeau is able to pretend that the cut is a moral one, in the name of supporting Ukraine, instead of a deeply unpopular political one to meet United Nations and World Economic Forum climate goals.

According to Nate Horner, Alberta’s Agricultural Minister, the last crop was the most expensive to produce in Canada’s history.

The government were unresponsive to pleas by food growers to assess nitrogen emissions via food density, rather than absolute cuts. This is a similar problem for Australia, a nation that feeds and powers the world but keeps ending up the piñata of UN scorn where bureaucrats beat us until tax dollars fall out. Blind cuts are what caused Sri Lanka’s food growing capacity to collapse in a matter of months.

‘The world is looking for Canada to increase production and be a solution to global food shortages. The federal government needs to display that they understand this. We’re really concerned with this arbitrary goal,’ said David Marit, the Saskatchewan Minister of Agriculture.

‘The Trudeau government has apparently moved on from their attack on the oil and gas industry and set their sights on Saskatchewan farmers.’