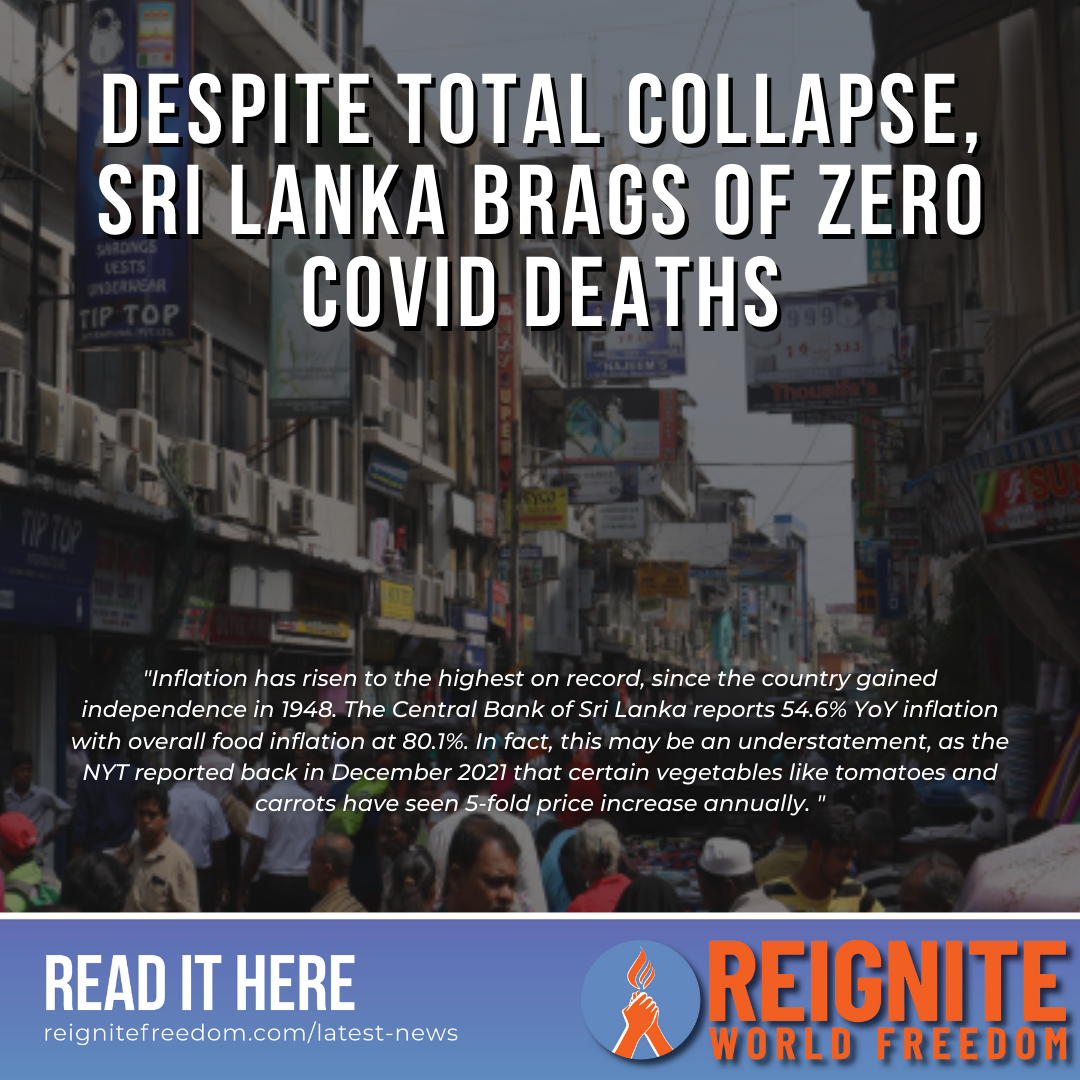 “Nothing is so permanent as a temporary government program.” ~ Milton Friedman

Not only does Milton’s quote hold true in times of dire crisis, but worse, programs expand with even less scrutiny and oversight.

If you’re unfamiliar with the situation in Sri Lanka, here are a couple videos to give you an idea. Bad governance is to blame (or too much governance), namely an ill-advised fertilizer ban which stoked a severe food shortage and export drought. Combined with the debt servicing pains as central banks around the globe tighten policy, it’s nothing short of a disaster.

Inflation has risen to the highest on record, since the country gained independence in 1948. The Central Bank of Sri Lanka reports 54.6% YoY inflation with overall food inflation at 80.1%. In fact, this may be an understatement, as the NYT reported back in December 2021 that certain vegetables like tomatoes and carrots have seen 5-fold price increase annually.

According to NPR, “the World Food Program’s most recent analysis reported that 86% of families were either skipping meals, eating less or buying worse food.”

Thankfully, there is a silver lining: ZERO COVID DEATHS! That’s right, on Monday July 18, Sri Lanka’s Department of Government Information (which continues to publish daily covid death counts) announced that there was not a single Covid fatality the day prior:

Sri Lankan residents must be reassured to know their authorities are focusing on the essentials during a time when public debt servicing rates have risen 6-fold from 5.22% a year prior to 31.01% today. In this same period, the Central Bank of Sri Lanka’s balance sheet more than doubled from roughly $11 billion USD to over $27 billion USD.

Apparently, owning over one fourth of their entire sovereign bond market was not enough QE to prevent rates from exploding nor was it enough to keep the Ministry of Finance from defaulting for the first time in its history. Surely, maintaining the Covid-tracking bureaucracy amid an unprecedented financing crisis is the kind of bold leadership that the IMF hoped to foster with their 16th bailout for the nation.

In the spirit of never letting a good crisis go to waste, the central bank has launched an effort to create a “comprehensive data gathering system on cross border transactions and domestic foreign currency transactions”. Referred to as the International Transactions Reporting System (ITRS), the plan aims to fill a “multitude of existing data gaps”.

Leaving civil liberty concerns aside, the timing of such an initiative is absurd! On top of subjecting private banks to additional compliance costs, which ultimately will be passed on to customers in the form of higher lending rates (rates that have already quadrupled since last July, see below), tax payers must also fund the ITRS Monitoring Unit to ensure they’re being properly spied upon.

Now that the president who oversaw this mess has fled the country, Prime Minister Ranil Wickremesinghe will fulfill the role. Protestors set his house ablaze to voice their excitement. When will the masses wise up and, instead of falling for the false promises that got them here, demand deregulation? When will we stop electing leaders like this:

Double masked. Didn’t he get the memo there are zero Covid deaths?