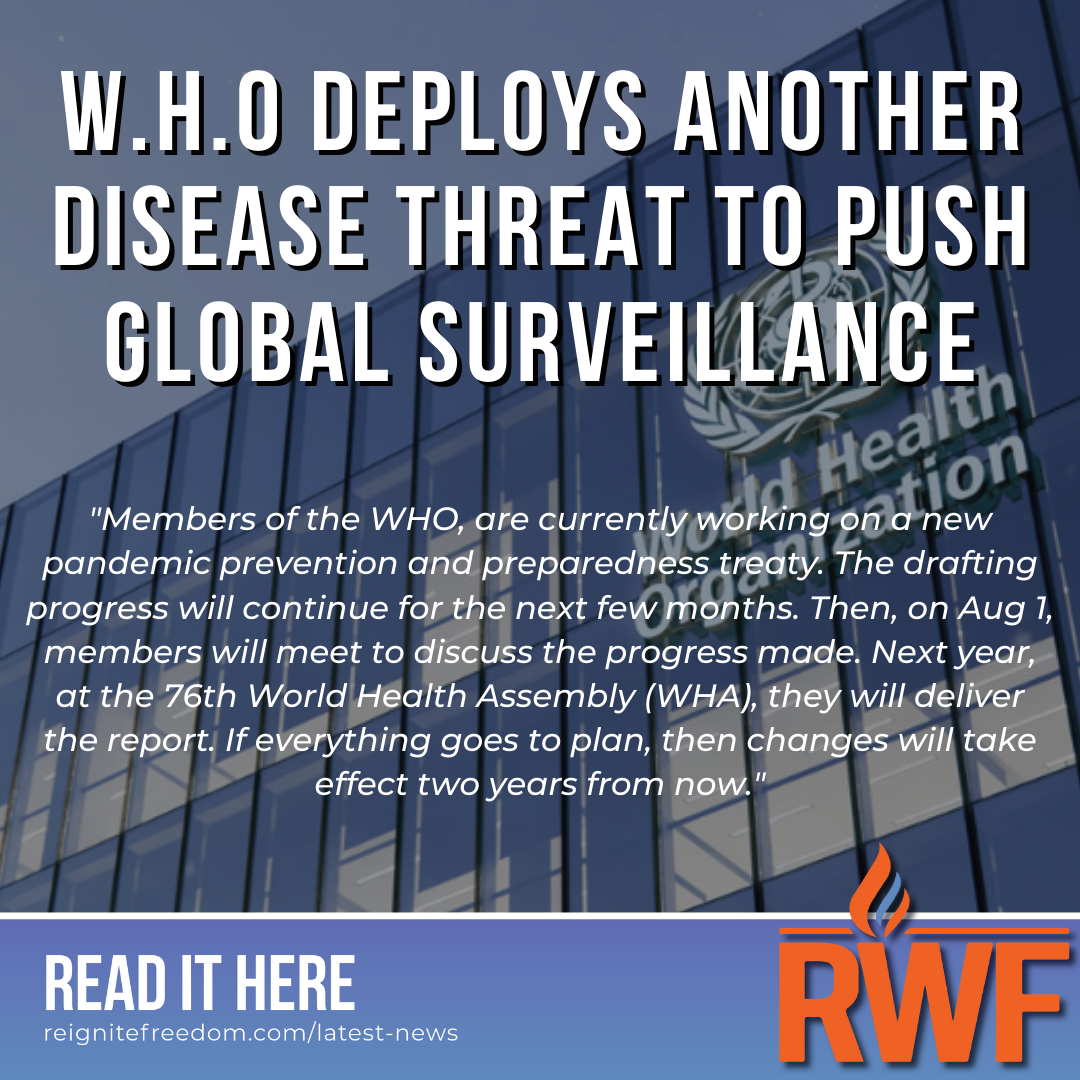 WHO Deploys Another Disease Threat to Push Global Surveillance

The following article from the Epoch Times.

The threat posed by monkeypox is real, very real. Or is it?

According to Dr. Robert Malone, not really. But you could be forgiven for thinking otherwise. The way in which the virus is being covered, Malone recently noted, “provides a classical example of public health fearporn.”

CNN, one of the many outlets breathlessly covering the virus, “should be reprimanded for broadcasting irresponsible propaganda—misinformation and disinformation—under the guise of journalism,” wrote Malone. In his opinion, this virus and disease, “which is endemic in Africa,” is “readily controlled by classical public health measures.”

More importantly, it “does not [emphasis mine] have a high mortality rate.” This insignificant biothreat “has never been considered a high threat pathogen in the past.”

Malone finished by asking the media and so-called medical experts to “stop the fear mongering, misinformation and disinformation.”

Malone’s request has been ignored, with doctors around the world telling us to prepare for the worst. President Joe Biden has also joined the chorus of doomsayers. Not surprisingly, the World Health Organization (WHO) is also making noise.

More worryingly, the WHO is making moves, and these moves could have profound effects on billions of people around the world, including those residing in the United States.

On May 20, the WHO held an “emergency meeting” to discuss monkeypox.

As Reuters reported, members of the WHO’s Strategic and Technical Advisory Group on Infectious Hazards with Pandemic and Epidemic Potential (STAG-IH), “which advises on infection risks that could pose a global health threat,” will soon decide whether or not “the outbreak should be declared a public health emergency of international concern.”

As the aforementioned Dr. Malone noted, it shouldn’t. But don’t be surprised if the WHO thinks otherwise.

Members of the WHO, one of the most powerful agencies in the world, are currently working on a new pandemic prevention and preparedness treaty. The drafting progress will continue for the next few months. Then, on Aug. 1, members will meet to discuss the progress made. Next year, at the 76th World Health Assembly (WHA), they will deliver the report. If everything goes to plan, then changes will take effect two years from now.

What Sort of Changes?

According to authors at Reclaim the Net, a website dedicated to defending free speech and calling out bureaucratic overreach, we should brace ourselves for draconian changes. It must be noted that the authors at Reclaim allegedly managed to get their hands on a working draft of the WHO’s plans, so the following warnings could carry a great deal of weight.

Reclaim warns that the WHA, the decision-making body of WHO, “aims to have this treaty adopted under Article 19 of the WHO Constitution.” If successful, this will give “the WHA the power to impose legally binding conventions or agreements on WHO member states if two-thirds of the WHA vote in favor of them.” To put that sentence in context: There are 195 countries in the world; the WHO has 194 member states.

The WHO has framed this treaty “as an international pandemic treaty.” However, the draft obtained by Reclaim shows that the accord has actually evolved to cover all manner of “health emergencies.”

The WHO defines a public health emergency as a situation that “carries implications for public health beyond the affected state’s national border” and “may require immediate international action.”

The definition is vague, perhaps by design, allowing those in charge to push any agenda, no matter how nefarious.

Again, as authors at Reclaim warned, such an all-encompassing treaty would give the WHO “sweeping, legally binding powers to force member states to adopt many of the censorship and surveillance tools that were imposed during the COVID-19 pandemic.”

International vaccine passports are not out of the question. In fact, as the draft outlines, member states will be legally required to fully “support the development of standards for producing a digital version of the International Certificate of Vaccination and Prophylaxis.”

The authors at Reclaim stress that non-state actors, which “could include Big Tech companies,” will “also be required to work with governments, the WHO, and other international partners.” Why? To “leverage their considerable data to “create the strongest possible early warning and response systems.”

As mentioned earlier, Dr. Malone has passionately called for an end to the spread of misinformation and disinformation. The draft treaty also calls for the same. The report’s authors urge members to support a globally coordinated attempt “to address the misinformation, disinformation, and stigmatization that undermine public health.”

Considering the WHO has a history of spreading false information, the call to “address” the problem seems, at best, disingenuous. All things considered, however, disingenuous messaging should be the least of our concerns here. If the current draft becomes a reality, the light from the panopticon will shine even brighter. There will be nowhere to hide. Vaccine passports will be the norm, and our right to privacy, or at least some degree of privacy, will become but a distant memory.