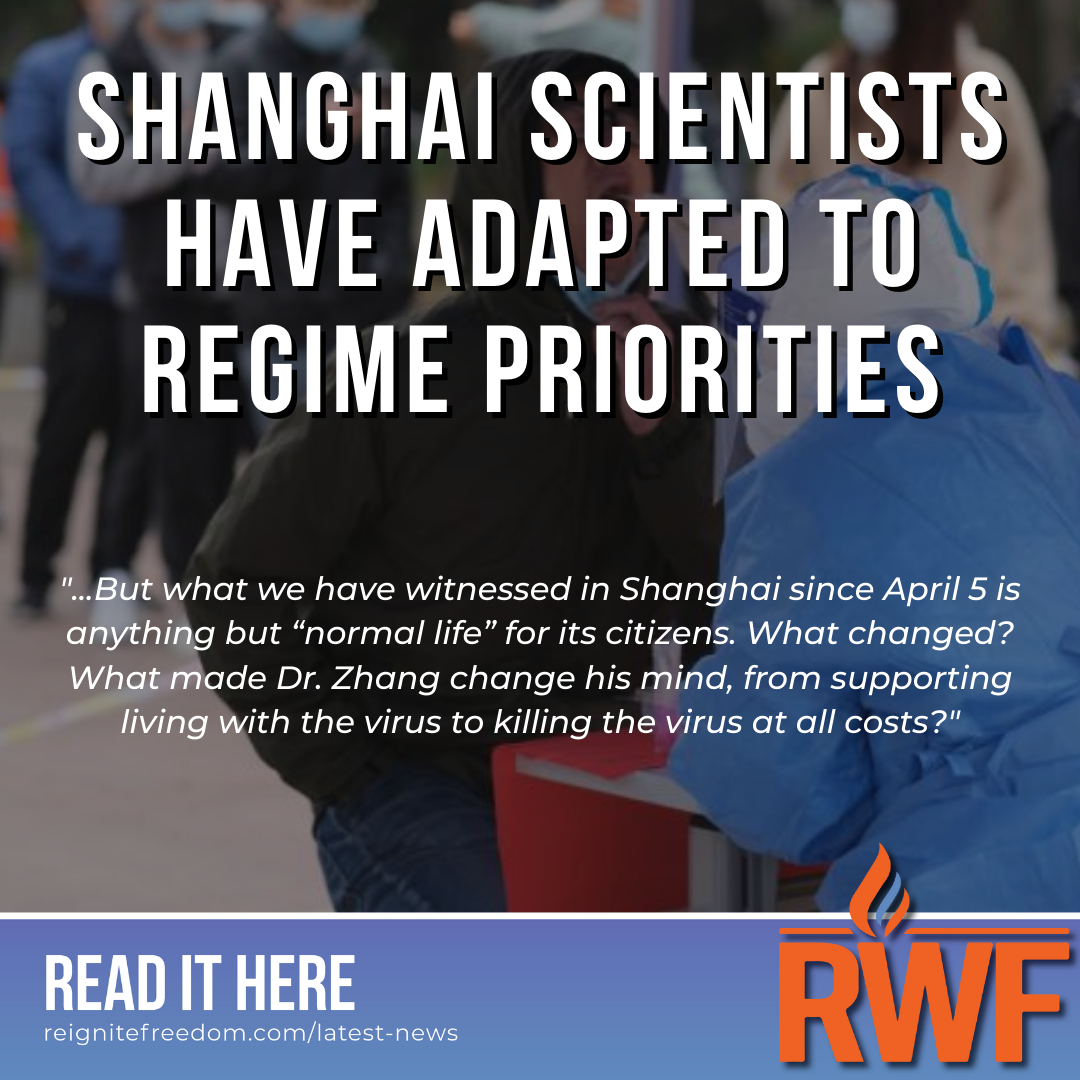 The following article is from the Epoch Times

Not long before that, however, Wenhong Zhang, then head of Shanghai’s COVID Control Experts Committee, spoke out in favor of coexisting with the virus.

“We cannot have the mindset of killing the virus at all costs. We must secure a normal life of our citizens, while at the same time controlling the spread of the virus,” he said publicly on March 24.

But what we have witnessed in Shanghai since April 5 is anything but “normal life” for its citizens. What changed? What made Dr. Zhang change his mind, from supporting living with the virus to killing the virus at all costs?

In a word, the CCP. The same regime that killed millions of its own citizens during peacetime and allowed SARS-CoV-2 to spread around the world in early 2020, is also capable of making people doubt what they see with their own eyes, deliberately peddling a falsehood, an evil practice that dates back to ancient China.

Deer Are Not Military Horses

About 2,200 years ago during China’s Qin Dynasty, after the first emperor died, the second emperor just wanted to enjoy life, so he left all the power to eunuch Premier Zhao Gao. Zhao wanted all the high-ranking officials to be loyal to him. In order to test their loyalty, he brought along a deer and insisted on calling it a horse suitable for the military. The officials who agreed that the deer was a horse all got promoted, while those who said the deer was in fact a deer were executed.

Zhao then had total control, but not for long. His government was brought down by Liu Bang’s powerful army (with real horses). Zhao and all the officials who backed him in his lie died, as did the Qin Dynasty.

Zhao’s tactic was similar to the modern-day expression “the emperor has no clothes.” In Hans Christian Andersen’s book “The Emperor’s New Clothes,” the emperor was fooled by swindlers who claimed his suit of clothes could only be seen by men of legitimate birth, until an innocent child pointed out the obvious—that the emperor wasn’t wearing any clothes.

Despite that these were obvious lies—the deer wasn’t a horse and the emperor wasn’t wearing any clothes—they were successful in forcing people to go against their own better judgement and possibly even their own conscience.

Under Xi Jinping, China has been implementing a zero-COVID policy to varying degrees since the beginning of the pandemic, using it to boost the regime’s “success” in controlling the spread of the virus as being superior to Western democracies.

However, it cannot control Omicron, despite its cruel lockdowns. In fact, Omicron is, like air, beyond the control of any government. Even World Health Organization director-general Tedros—an admirer of China’s handling of the virus outbreak at the beginning of the pandemic—said at a media briefing on May 10 that the WHO does not think China’s COVID policy is “sustainable considering the behaviour of the virus.”

“We have discussed about this issue with Chinese experts and we indicated that the approach will not be sustainable,” he said. “I think a shift would be very important.”

It seems Tedros is not trying to hide his opinion anymore. And at the same press briefing, WHO emergencies director Mike Ryan said: “We need to balance the control measures against the impact on society, the impact they have on the economy.” Sounds like Wenhong Zhang’s position in March.

Anyone with any microbiology or epidemiology training would look at the science of Omicron and conclude that zero-COVID in the era of this variant is impossible.

Why did Dr. Zhang change his mind, from a forward-thinking “live with the virus” position to the “zero-COVID” nonsense, and why did his two colleagues take the same stance?

Some choose to enforce the narrative of the CCP in the hope of being rewarded. I just hope that the authors of the Lancet propaganda piece did not write the article to get promoted.

I did my undergraduate at Fudan University, where Zhang Wenhong got his PhD and is now the director of a hospital affiliated with Fudan, and my master’s at Jiaotong University, where Saijuan Chen is director of the State Key Laboratory of Medical Genomics and where Xinxin Zhang is a doctor in the chemistry department. As an alumnus of these universities, I must say that I am deeply disappointed that for all the education and experience these doctors have, they chose to praise and validate the CCP’s incredibly misguided zero-COVID approach, calling it life-saving while it has actually cost many lives.

The three did so in the most damaging way, i.e., using their influence to have their CCP propaganda piece published in The Lancet as science—a masterstroke in this new era of scientific misinformation.

If someone who doesn’t recognize propaganda for what it is and doesn’t know the lying nature of the CCP were to read the Lancet article, they might well believe that the COVID-zero lockdown approach is saving lives in Shanghai.

But nothing could be further from the truth. It’s now well known that the fallout from the lockdown has been significant. On April 23, Miao Xiaohui, a prominent infectious disease expert in Shanghai, said the lack of medical resources during the lockdown may lead to a large number of additional deaths of non-COVID patients. He estimated that the number of deaths of diabetic patients caused by the one-month lockdown of Shanghai may be nearly 1,000, and that the suicide rate had risen by 66 percent caused by psychological problems during the lockdown period.

It has also taken the megacity to a complete standstill. The social and economic impacts are enormous.

And yet, none of this was of any concern to the three doctors. Rather than questioning the zero-COVID policy, they instead emphasized the fact that in Shanghai, “vaccination coverage has remained low in older adults—62 percent of 5·8 million people older than 60 years have been vaccinated, and only 38 percent have received a booster dose,” hence the necessity of the lockdown.

So to protect 38 percent of the 5.8 million people (2.2 million of whom are presumably at high risk for COVID), the CCP had to lock down a city of 26 million? They could simply have increased vaccination, which would have cost a fraction of what the lockdown cost and with far less hardship on Shanghai’s residents.

If a city can do multiple nucleic acid tests per week on its 26 million residents, it can certainly vaccinate 2.2 million seniors in a timely manner.

But is there something about the vaccines that the three doctors do not want to talk about? It could well be, in which case they should just stay silent. But if the CCP has other ideas, that may not be possible.

In Wenhong Zhang’s case in particular, besides being the director of infectious diseases at Fudan University’s Huashan Hospital, he is also the CCP party secretary in his hospital unit. When there is a conflict between his profession as a medical doctor and his political affiliation as a CCP boss, guess which side wins? The CCP’s every time.

It must also be asked why The Lancet, a world-renowned medical journal, published this piece of obvious CCP propaganda.

Although Beijing has been busy spreading its propaganda since the outbreak in Wuhan, having this article accepted by the most prestigious and trusted Western medical journal is a real coup. It validates the CCP’s cleverly crafted zero-COVID “science.”

This is very scary. The CCP has been propagating its propaganda worldwide since it came to power in China, but now its propaganda is coming to you through the corridor of “science.” An invisible Trojan horse might have already entered our countries. The Lancet could be just a small part of it.

The three doctors are smart people. They know all too well that the Shanghai lockdown is wrong and costing lives, but they have to use all their professional expertise in scientific paper-writing to advance the narrative of their CCP bosses. As opportunists they have chosen the CCP, so they must fulfill their Party obligations.

The Qin officials knew a deer was a deer, not a military horse, but being opportunists, they went along with Premier Zhao and were rewarded with money and power. The unintended consequence, however, was the fall of the dynasty, leaving the officials little time to enjoy their rewards.

One can only hope that the three Shanghai scientists’ praise of the CCP’s zero-COVID policy and the publication of the article by The Lancet will lead the world’s people to realize that self-styled emperor Xi is not wearing any clothes. Hopefully, the CCP will become a laughingstock and quickly collapse, before too many innocent people die unnecessarily because of its senseless and destructive zero-COVID policy.