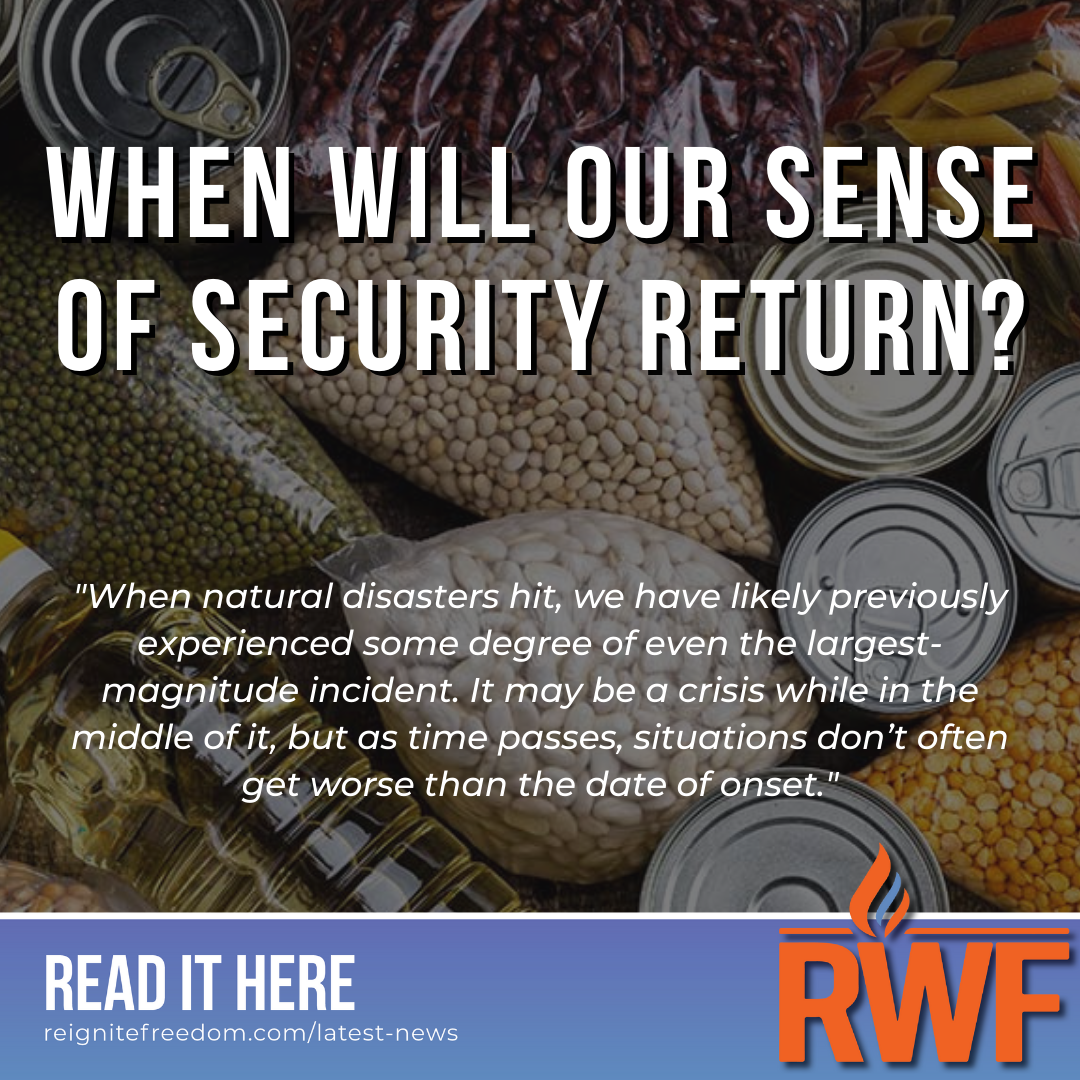 When Will Our Sense of Security Return?

When faced with incoming disasters, we undergo personal status checks to evaluate our risk of making it through unscathed. If a tornado or hurricane hits, we hope for eventual relief by FEMA or the American Red Cross into our hoarding of supplies.

We know our suffering – even with great loss involved – will be temporary, relieved by soggy cheese sandwiches and even the most basic of sustenance to mitigate our hunger, rudimentary shelter to give respite, and medical aid. But we are coming to expect disjointed, often contradictory responses from our national leadership, as any remaining trust quickly wanes.

When natural disasters hit, we have likely previously experienced some degree of even the largest-magnitude incident. It may be a crisis while in the middle of it, but as time passes, situations don’t often get worse than the date of onset. Even if major, we are familiar with the steps required to see our way through to the eventual calm of the demolition and rebuilding phase.

Pandemic response has shed light on our ill-preparedness in ways we previously never considered, such as the lack of a stockpile of formula. Preparedness in these predictable disasters has proven different from total, endless fallout, like those barricaded in their apartments in Shanghai for such a long time that everyone has just stopped talking about it.

The citizens whose cabinets are raided and the echoing onslaught of non-mitigating interventions, such as nonsensical mass “quarantines” are transparent: this is about status and control, not pathogenic mitigation.

The truly impoverished, who couldn’t afford toilet paper, let alone stockpile it during the great toilet paper debacle of 2020, are our nearest representation of what third-world countries experience on a daily basis, and we may finally have started seeing that first or third-world status alike are simply semantics for what can exist next door to one another in even our most developed of nations.

We are now seeing people sharing information about producing insulin during a crisis, or recipes for baby formula that great-grandmothers used, because we continuously band together to try to make the best of dire situations.

Many among us will stand up to lend a helping hand, even if our efforts are misguided (such as we saw people comply with the erroneous concept of masks acting as source control for aerosols).

But can we actually place blame on mothers for buying a one-year supply of formula when their shelves are finally replenished? This justifiable panic leads to overbuying, stockpiling, and we know that by doing so, others will go without, but doing so is innate, just as bees store nectar for when the flowers inevitably fail to bloom. When it is your starving infant, nothing outside of your bubble will matter as those hours without drag on.

We have seen lockdowns for weeks and months on end, supply-chain disruptions, and price gouging lead to panic buying and the feeling of never having enough, never being truly prepared, which is the unfortunate truth in the matter.

Your formula is worthless if your water supply is tampered with, and your meat stockpile will quickly be fodder for the flies when California follows through with their threat of power supply sanctions on its residents. As we do our best to pivot and prepare, we are relentlessly blindsided by the next event in the degradation of our contentment, resulting in diminished willpower to keep fighting back.

Predictable surges in supply and demand that eventually diminish aren’t what caused this. Whether over our PPE shortage (of bottom of the barrel, non-mitigating respirators), or baby formula, fuel, toilet paper, or the next item we panic over, it all keeps pointing back to feckless leadership that excluded citizen input for more than half a century and left us all convinced they were doing something productive all this time.

Our old sense of security was false, and now we keep trying to get it back, trying to convince ourselves that our safety was their focus all along, like dejected lovers who just don’t see that he was married to someone else all along – you just paid the bills, sweetheart.

But I hope this mistrust and desire for better discretion over spending and control does not fade away like all other big news items tend to do, because in this instance we are talking about actual starvation of real and actual babies, and we can’t just virtue signal our way out of this one.

This isn’t the same as paying higher rates for gas – we were there during the Obama years and it sucked but we survived. We’re talking failure to thrive, irreparable harm that can result in death of our citizens. And consider the fundamental cause: the massive and coercive disruption of social and market functioning for the better part of two years, all in the name of virus control.

Our leadership keeps proving out how truly unprepared and incompetent they are in vastly different areas. Why aren’t we listening, as they warn us that it’s only getting worse, yet we continue to be so comfortably detached? The truth is that our leaders did this to us, under the advice of intellectuals who thought they knew better than everyone else. Now we live with the shocking fallout.