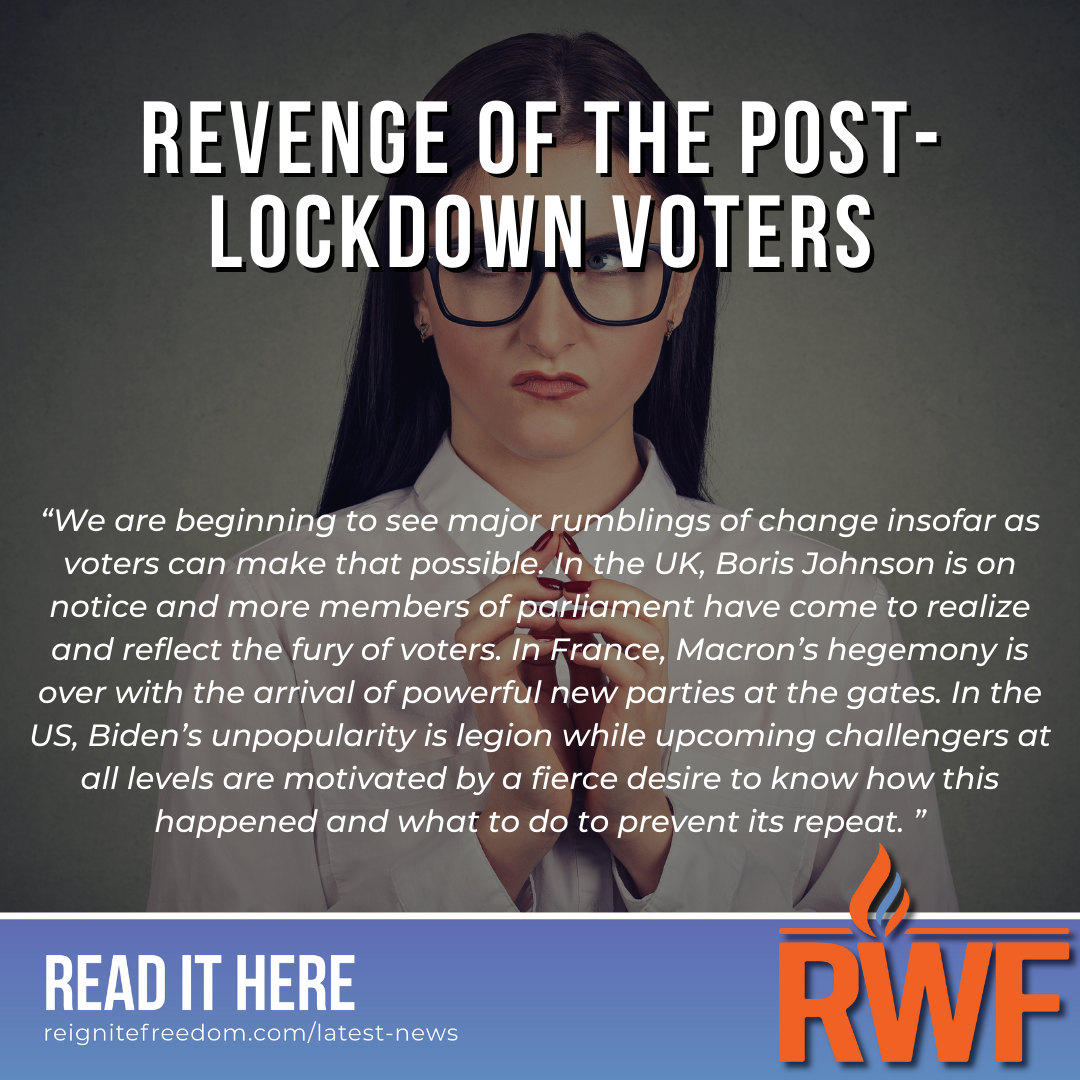 Revenge of the Post-Lockdown Voters

You might have noticed a certain political instability in the air, not just in the US but all over the world. In a world in which people generally care about rights and freedoms, surely this was inevitable, however much the expert managerial class failed to anticipate it. Beginning in March 2020, much of the world embarked on a wild experiment to treat peoples of the world as lab rats in an experiment in virus control. The experiment failed and has left chaos in its wake.

We are beginning to see major rumblings of change insofar as voters can make that possible. In the UK, Boris Johnson is on notice and more members of parliament have come to realize and reflect the fury of voters. In France, Macron’s hegemony is over with the arrival of powerful new parties at the gates. In the US, Biden’s unpopularity is legion while upcoming challengers at all levels are motivated by a fierce desire to know how this happened and what to do to prevent its repeat.

The Wall Street Journal’s Daniel Henniger has written a fantastic reflection on the big picture and the growing upheavals. Portions are excerpted below. We would only add a major lesson of the last two years: the influence of sitting politicians has clearly been bested by the administrative state, which in most countries imagines itself to be the true rulers of the social order, contrary to all democratic principles. This machinery needs a fundamental challenge if there will be genuine reform.

The current global discontent with economic life is overwhelmingly a function of one other word: lockdown. Lockdowns are normally associated with prison riots, not the world’s economies. One may admit that the first months with the mysterious Covid-19 virus were a time of generalized panic, and governments defaulted to the epidemiologists’ standard fix of social quarantining. But then leadership essentially let the public-health bureaucracies take over their countries’ economic life.

What’s impossible not to notice is how the lockdowns exposed the intricacies of the world’s market economy. We are hearing a lot now about long Covid, the physical aftermath of the virus. As debilitating is long economic Covid.

Long economic Covid is why anyone you sit next to at dinner can dilate on the arcana of interrupted global supply chains. We’re now coming to realize how the market economy’s performance and benefits are taken for granted. All those goods—made, purchased, packed and shipped—were as reliably available as turning on a light. Actually, one of the things we’ve learned during this time is that even turning on a light isn’t like turning on a light. Disrupt the always-on but complex power grid, as in Texas and California, and the lights stop coming on.

This persistent post-pandemic disruption is the result of government choices. In 2020, the public sector told the private sector simply to stand down. When the pandemic lockdowns were extended deep into 2021—in the U.S., France, U.K. and elsewhere—the global economy’s extraordinarily complex grid of relationships fractured at every level.

We have arrived at stupid.

Governments and the private economy have coexisted uneasily for decades. But during that time, as often argued here, left-of-center politicians, notably in the Democratic Party, lost their understanding of how the private sector works. Some liberal commentators have worried for years that this self-imposed ignorance was turning middle-class wage-earners into the collateral damage of antibusiness policies. The lockdowns just killed these workers.

Past some point of the pandemic’s policies of systemic closure—of businesses and schools—the politicians had no clue about how to manage the mess they’d made. Mr. Biden and his party sent several trillion dollars of temporary income support into an economy unable to absorb it efficiently. We have ruinous inflation. Mr. Johnson’s government imposed Mickey Mouse taxes, such as a 2.5-percentage-point increase in the payroll tax to prop up the National Health Service.

The cluelessness won’t stop. As the energy industry attempts to right itself and restore production, some in the U.S. are proposing a windfall-profits tax, as recently imposed by Mr. Johnson in the U.K. Great idea: Let’s get rehired workers laid off again.

Mr. Biden says he’s presiding over a fundamentally strong economy. But as the economy finds its footing, the dislocations of the lockdowns persist across the U.S. Small businesses say they can’t compete for workers with corporations, which are offering inflated wages. This isn’t just Labor Department employment data. Those small companies are crucial to the normally smooth functioning of economic life. Meanwhile, Transportation Secretary Pete Buttigieg, like King Canute commanding the tides to recede, has ordered the airlines to hire (and hopefully train) more customer-service workers. From where?

The political backlash is coming from below. The long suppression of national economies has primarily hurt individuals at the lower end of the income scale, and where countries hold real elections, incumbents are getting axed.

In the U.S., the revenge of the locked-down voters is likely to return conservatives to power this year and in 2024. Republicans should run on just five words: We will do the opposite.