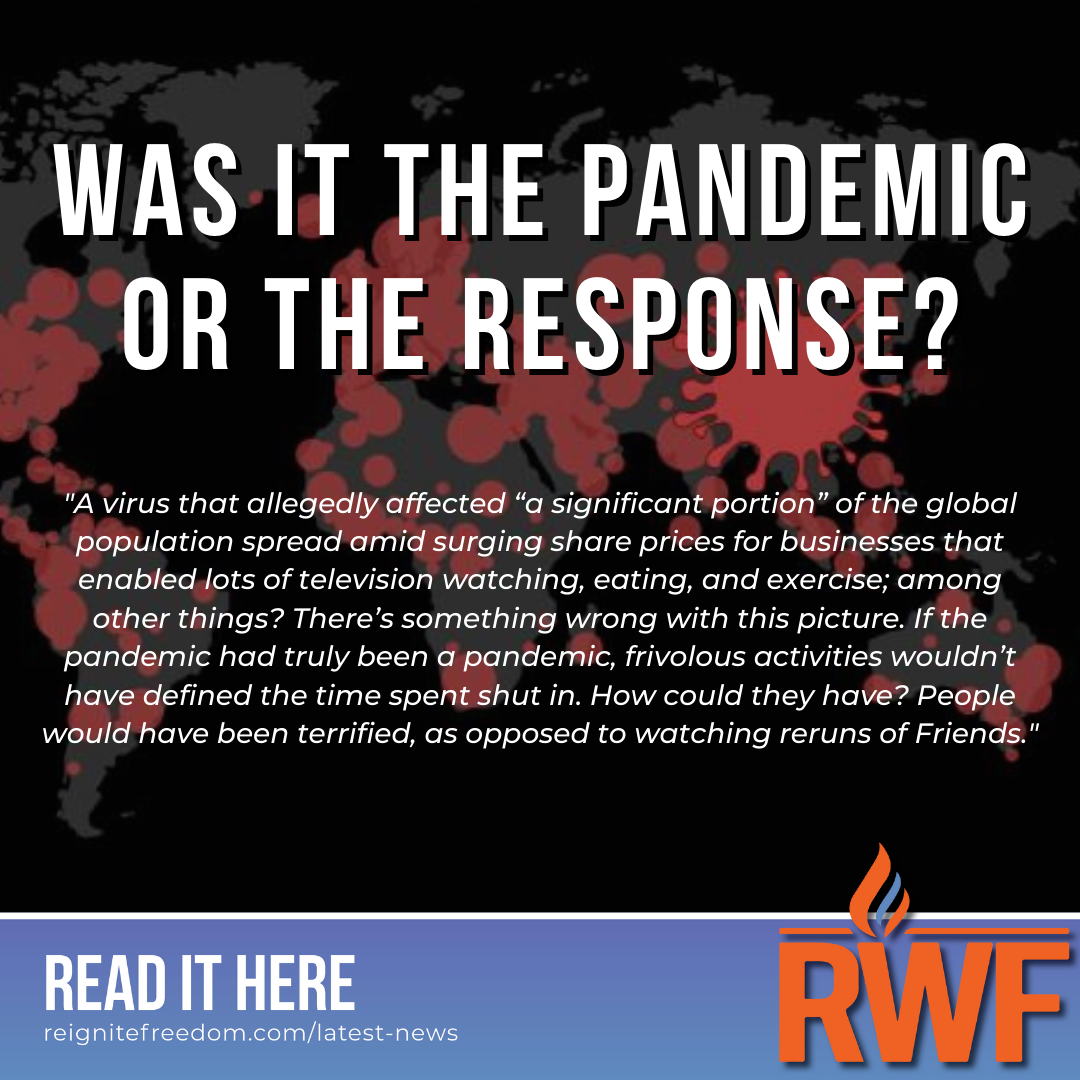 Was It the Pandemic or the Response?

“Despite strong levels of vaccination among older people, Covid killed them at vastly higher rates during this year’s Omicron wave than it did last year, preying on long delays since their last shots and the variant’s ability to skirt immune defenses.”

So wrote Benjamin Mueller and Eleanor Lutz in a New York Times front page story earlier in the week.

The Times has always provided lots of sober truths about the virus inside articles with frequently alarmist titles. As the author of When Politicians Panicked, an economic critique of the horrid lockdowns inspired by the virus, it’s very easy to say that without the extensive coverage of the Times, my book would have been much less informative, and yes, confident.

Regarding confidence, if you really wanted to know just how wrongheaded the lockdowns were, the best way to know was to read the newspaper that supported them. The reporting was unwittingly balanced, particularly for those willing to take the time to read deeply into the articles. And from the earliest of days, the Times regularly reported that in a lethal sense, the virus had a very strong association with very sick, very old people. Not much has changed, it seems. The title of the report from Mueller and Lutz was “Older Americans Died At High Rate In Omicron Wave.”

About what’s been written so far, none of it should be construed as something meant to minimize older people, or their worth. As someone with parents aged 78 and 80, anything that threatens them is a worry. At the same time, what was written in the first two paragraphs was typed out in order to make a point about the meaning of words.

In particular, this write-up aims to critique how the last twenty-seven months have been defined. Politicians, authorities, experts, and individuals from both sides of the ideological spectrum have routinely happened on pandemic in their description of times that we’re in, or have been in (one can hope). The description read and reads as overkill.

To see why, consider the Merriam-Webster dictionary definition of pandemic. It’s described as something “occurring over a wide geographic area (such as multiple countries or continents) and typically affecting a significant proportion of the population.” Okay, let’s stop right there.

No doubt the virus spread globally, but the part about it “affecting a significant portion of the population” in no way rang true. It didn’t, and readers willing to be honest know why.

To see why, please think about what you did during the lockdowns. Without knowing the infinite individual decisions made, it’s not unreasonable to point out that a large swath of the U.S. population in particular watched movies. That’s an easy assumption to make since the shares of Netflix soared. Memory says that one of the more unexpectedly popular hits of the lockdown period was Tiger King.

When the locked down weren’t watching movies and binge-watching TV shows, it seems they were doing a lot of cooking. Visits to grocery stores vivified this truth. Baking products were in particular popular among those enduring what all too many referred and refer to as a pandemic.

Of course, the shut-ins couldn’t be expected to cook every meal. And they didn’t, it seems. Uber Eats, GrubHub, Postmates and various other food-delivery services prospered during the lockdowns. Apparently there were enough in the way of “subhumans” willing to deliver to the worried “at” their places of residence. “At” is placed in quotes simply because the various delivery services provided space for the worried to type out strict instructions about how the meals were to be delivered.

No doubt some remember “drop the bag at the doorstep,” “no knocking on the door,” “don’t ring the doorbell” lest the working-class germs of the delivery persons remain.

It all raises a question about what people did to maintain their figures amid all the binge-watching, eating, and advertising of their doings on social media.

The answer to the sedentary choices those locked down made seemed to be Peloton. Since public gyms meant to enhance our health and wellness were supposedly no longer safe to enter, Americans brought the gym home to them like seemingly everything else. Peloton sales surged during the pandemic! Call it the fitness face of the “pandemic.” Just don’t call it a pandemic.

A virus that allegedly affected “a significant portion” of the global population spread amid surging share prices for businesses that enabled lots of television watching, eating, and exercise; among other things? There’s something wrong with this picture. If the pandemic had truly been a pandemic, frivolous activities wouldn’t have defined the time spent shut in. How could they have? People would have been terrified, as opposed to watching reruns of Friends.

On the other hand, hundreds of millions were affected by the virus; albeit not due to its lethality. The simple truth is that when the world’s well-to-do take a break from reality amid intense panicking by politicians, those with the least suffer mightily.

The New York Times had a front page story in the summer of 2020 about how 285 million human beings around the world were rapidly headed toward starvation as a consequence of lockdowns that rendered jobless so many of the world’s most vulnerable. This was a panic, not a pandemic. An exponentially greater portion of the global population was battered by the response to the virus, not the virus itself.

Confucius once observed that “When words lose their meaning, people lose their freedom.” Pandemic was redefined in 2020, and Confucius was proven prescient.