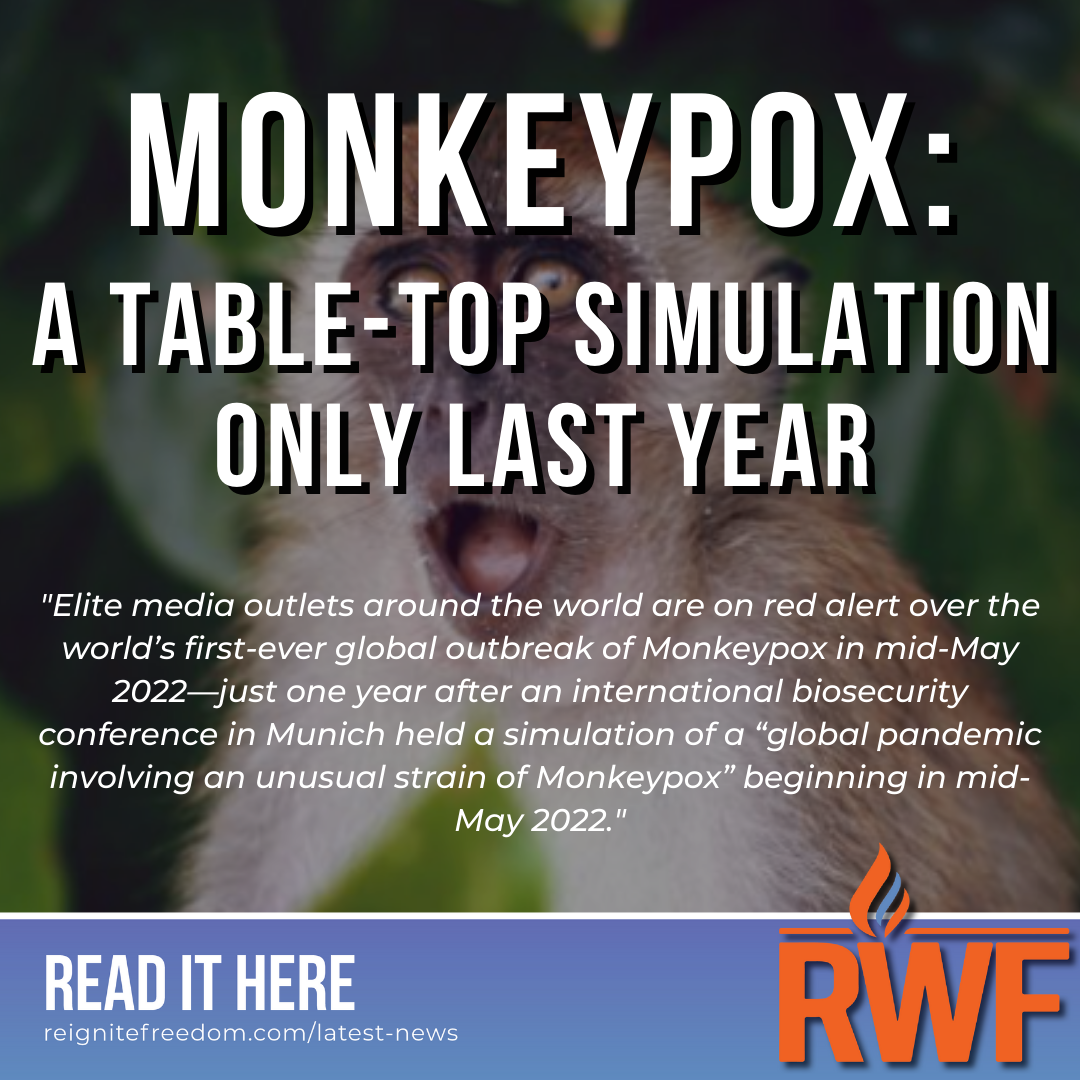 Monkeypox Was a Table-Top Simulation Only Last Year

Elite media outlets around the world are on red alert over the world’s first-ever global outbreak of Monkeypox in mid-May 2022—just one year after an international biosecurity conference in Munich held a simulation of a “global pandemic involving an unusual strain of Monkeypox” beginning in mid-May 2022.

Monkeypox was first identified in 1958, but there’s never been a global Monkeypox outbreak outside of Africa until now—in the exact week of the exact month predicted by the biosecurity folks in their pandemic simulation. Take these guys to Vegas!

Ed Yong, who’s penned dozens of hysterical articles on Covid for The Atlantic including such gems as COVID-19 Long-Haulers Are Fighting for Their Future, Even Health-Care Workers With Long COVID Are Being Dismissed, How Did This Many Deaths Become Normal? and The Final Pandemic Betrayal, is hot on the scene of the new Monkeypox outbreak.

Eric Feigl-Ding is also all over this.

The US Government is hot on the scene with an order of 13 million Monkeypox vaccine doses from Bavarian Nordic.

The WHO is on the scene.

Event 201 was hosted in October 2019—just two months before the coronavirus was first revealed in Wuhan—by the Gates Foundation, the World Economic Forum, Bloomberg, and Johns Hopkins. As with the Event 201, the participants at the Monkeypox simulation have thus far been stone silent as to their having participated in a pandemic simulation the facts of which happened to come true in real life just months later.

One person who was present at both Event 201 and the Monkeypox simulation is George Fu Gao, director of the Chinese Center for Disease Control. At event 201, Gao specifically raised the point of countering “misinformation” during a “hypothetical” coronavirus pandemic.

Here’s Gao at Event 201 right next to our very own Avril Haines, Director of National Intelligence—technically the highest-level intelligence official in the United States. Look at these cuties. Doesn’t that make you feel all warm and fuzzy? Phew. Making Kim Philby jealous.

That said, I won’t sit here and debate wild conspiracy theories that there might be anything unusual about a global pandemic occurring just months after a simulation of a global pandemic of exactly that kind, followed shortly after by the first-ever global outbreak of an even-more-obscure virus just months after a simulation of an outbreak of exactly that kind.

If you want to be a good American and make a six-figure salary—or be friends with people who make six-figure salaries—then do as your government tells you: Sit down, shut up, stay home, save lives, take your shots, show your papers, and muzzle your kids.