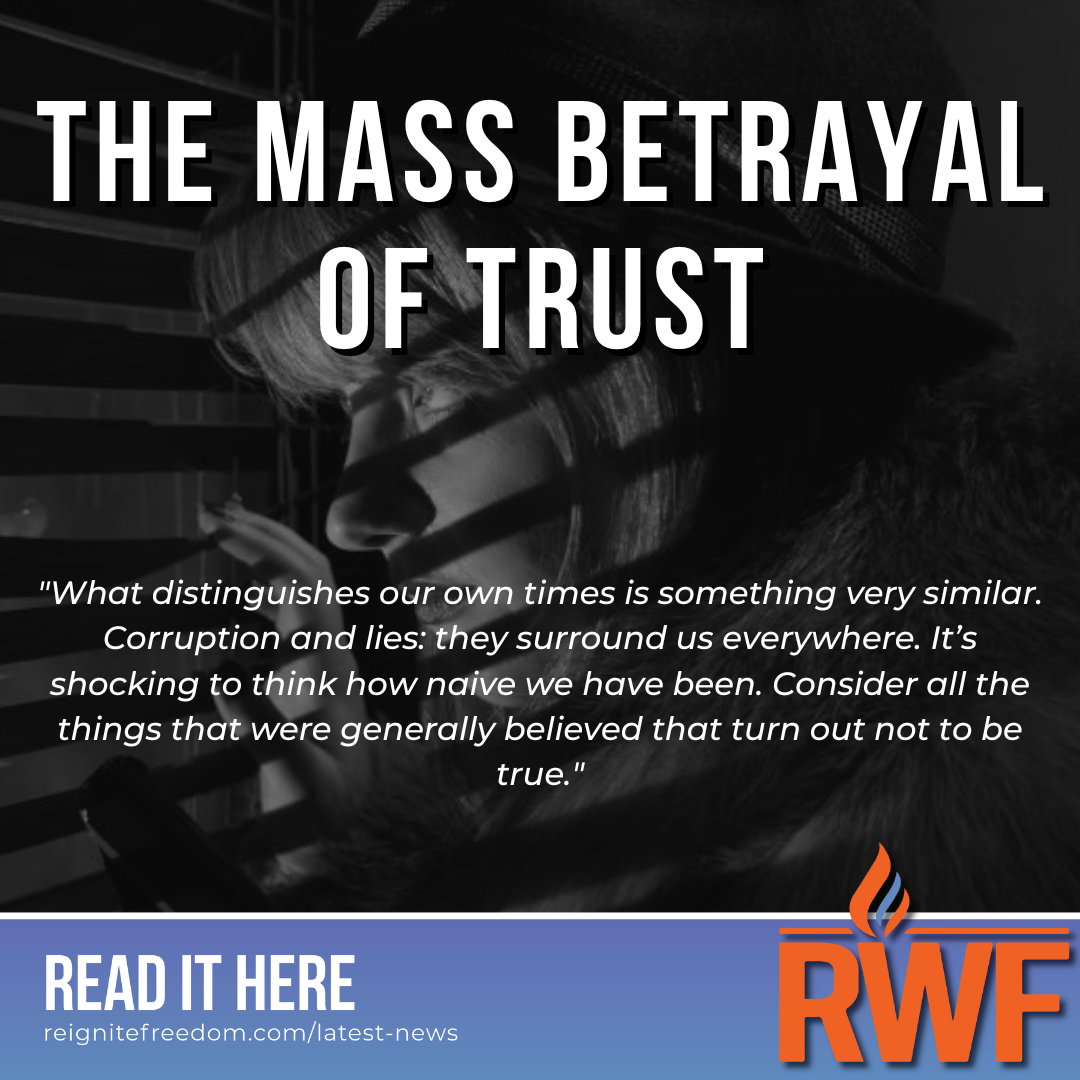 The Mass Betrayal of Trust

In the genre of film known as Film Noir – made in Hollywood during the late 30s and 40s – the defining mark is the loss of trust. Everyone has a racket. Someone who seems good is mostly just pretending. Information about the real story comes at a high cost. No one talks without coercion or payment. Bribes, blackmail, betrayal, and murder are all treated with shocking nonchalance. Seeming innocence is a mask for scam. There are layers upon layers of corruption. To be a cheat is the norm. To exploit another is a way of life.

The job of the one decent person is to outsmart the evil but he or she only maintains decency by never trusting anyone or anything, and presuming as a rule that all people and things are far worse than they seem. Cynicism is not a pose; it is a principle of survival.

This genre – very different from the Americana of popular culture before and after – reveals what economic depression and war can do to a people. They not only shatter innocence; they elevate the loss of trust as a cultural habit. Corruption is normalized and institutionalized. It pervades everything and everyone, and therefore affects everything that people think and do.

The name Film Noir is fitting. It’s dark. And the darkness comes from the mass loss of trust in everything and everyone. No one but criminal elements thrive in such a world. Decent people survive as they are able. And they only do so by recognizing the reality around them, namely that everything and everyone is compromised by the times.

So it was back then, at least in major parts of the urban landscape of those hard times.

What distinguishes our own times is something very similar. Corruption and lies: they surround us everywhere. It’s shocking to think how naive we have been. Consider all the things that were generally believed that turn out not to be true.

For example, we believed that:

We could expand this list without limit. The point is clear. We’ve been betrayed in ways that we never thought possible.

We didn’t even know the extent to which we once trusted; trust in some measure has long been baked into the experience of American life. Americans generally see themselves as earnest and sincere members of a glorious commercial republic who, despite failings here and there, inhabit a society that is always striving for the good. And yet we now look at our institutions and we are aghast to find that something very different has grown up among us, and in very short order.

And so it’s not just that innocence is gone; it’s that trust has evaporated too. How often now do we respond to the latest news or the latest speech or the latest pronouncement from a once-trusted big shot with a well-earned and cynical dismissal? This seems to be the way it goes today in most aspects of life.

The darkness featured in Film Noir was never supposed to return. The post-war world and culture were reconstructed to prevent it. People then needed something to believe in again. And so in the 1950s, the church was there. A movement for good government and honesty in politics began in earnest. The “best and brightest” came to power, sporting high credentials and touting their public spiritedness.

Film, architecture, art, music, and public life generally began to affect a new optimism in an attempt to restore a mythical version of some idyllic prewar past. And that was because no social order can thrive in the darkness of despair.

This can perhaps be the next stage of our social and political evolution. Maybe. But until those days arrive, we all must live in a world very different from that which we thought existed in 2019. The world that the lockdowns and mandates, and all that is associated with them, unleashed is dark, corrupt, duplicitous, dishonest, dangerous, tribal, and pervaded with nihilism and a loss of moral clarity and a resulting criminality both public and private.

How easy it turns out to be to shatter trust, to disable a functioning social order, to spread corruption from person to person, institution to institution, to the point that the center no longer holds! I’m quite sure that very few among us knew that. We know now.

What do we do with that information? We face it bravely, and we vow not to let it last. We can pledge to rebuild.