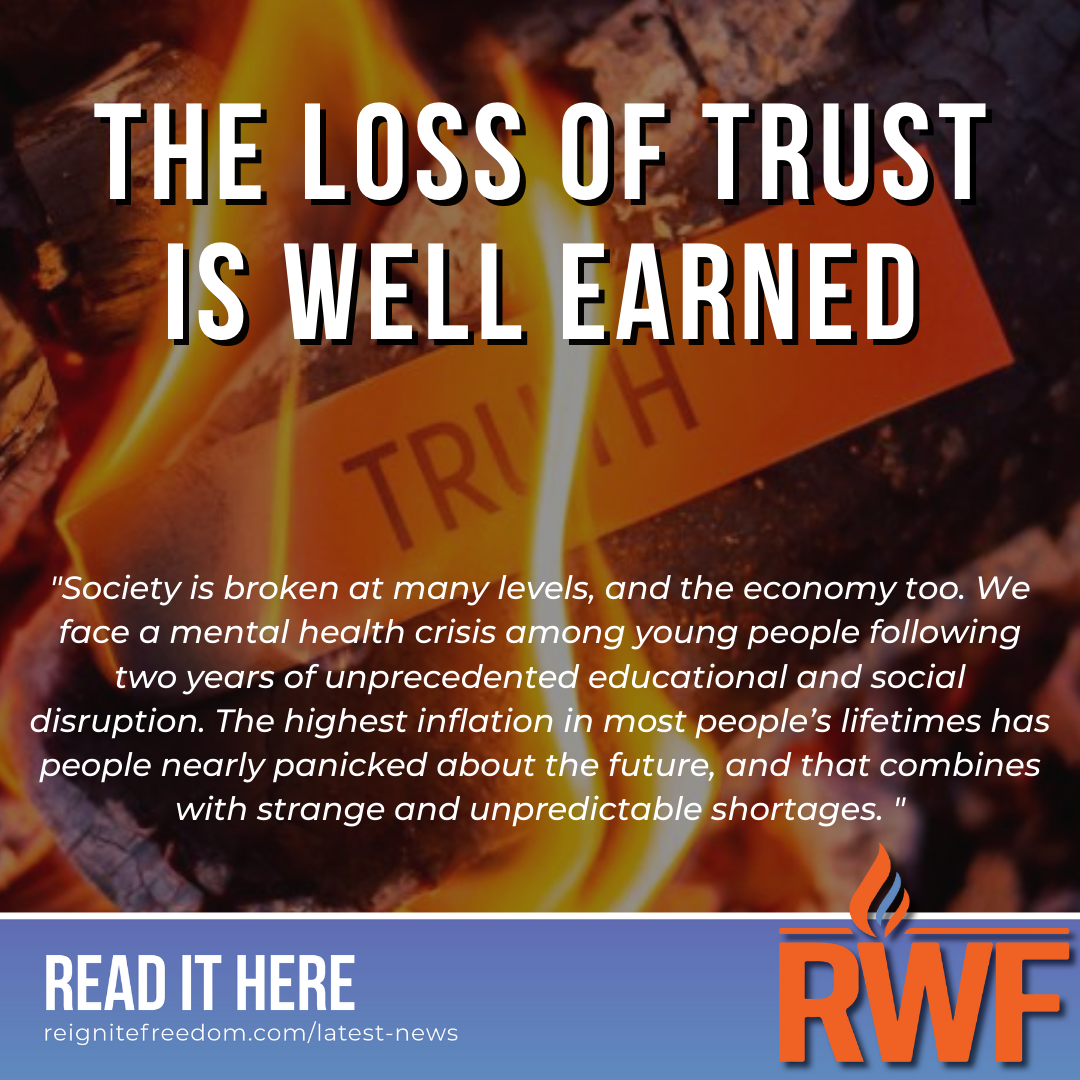 The Loss of Trust is Well Earned

Society is broken at many levels, and the economy too. We face a mental health crisis among young people following two years of unprecedented educational and social disruption. The highest inflation in most people’s lifetimes has people nearly panicked about the future, and that combines with strange and unpredictable shortages.

And we wonder why. Few dare call it for what it all is: a result of lockdowns and overweening control that has compromised essential rights and liberties. That choice shattered the world as we knew it. We cannot simply move on and forget.

The question I’m constantly asked is: why did this happen to us? There is no one easy answer but rather a combination of factors that involved both misunderstandings of cell biology and the social contract but also something more nefarious: the deployment and use of a crisis to further special interests.

Let’s try to sort through this.

We hoped that the disaster of the covid response was a one-time event. And that it had nothing to do with politics and interest groups. Maybe it was all some giant confusion? In which, the whole thing could be reversed. It was not part of some larger plot but merely an enormous screw up.

I’ve been hoping that since about March 20, 2020, when I figured that the politicians would get over their disease panic, while completely ignoring cell biology. People would surely clamor to get back to normal once the demographics of risk became obvious, rather than trying to live out Hollywood fantasies.

I was absolutely sure that would happen by the last week of March 2020, when major research journals spelled it all out in bold strokes, and the strategy of focused protection would be the normal. The popular scientific press even headlined it.

So it went for me and many of us through the summer. Then the fall. Then the winter. Then the spring, summer, fall, and winter. And yet here we are today with major American cities reimposing mask mandates to “protect” against covid. Still, you can’t walk into a DMV in the northeast of the US without a mask.

This is despite the complete absence of compelling evidence from anywhere in the world that they are effective in stopping or even slowing disease spread. We knew for sure that lockdowns would wreck the market, social functioning, and public health. We did not know that they would achieve any good at all, and we learned that they did not.

Evidence somehow stopped mattering in March 2020. Our new belief system somehow took over and all the rest just became words and numbers that have no connection to the reality that most people imagined to exist.

That points to the real problem of the last two years of our life: we have lived in a sea of intellectual confusion. People stopped understanding and thus trusting evidence and science in general.

In addition, there is a much more grave problem that will take many years to unravel. We don’t have a clear understanding of the relationship between the idea of human freedom and the presence of pathogens. For this reason, the social contract, which had been endogenous and evolved through centuries, was shredded.

If we want to fix that core problem, we have to look to this intellectual realm. We need a new understanding. We are nowhere near gaining that, sadly. If we think of covid as a one-time event, and not a symptom of a larger problem, we will be no closer to gaining that deeper understanding. This is not so much a partisan problem. The confusions were on the right, the left, and even (and often especially) on the part of libertarians, much to my tribal embarrassment.

Whenever people ask me the great question of why all this happened, my answer is always: at root, intellectual confusion. The problem traces to the ideas the broad culture holds that are simply incorrect, among which is that the state has the power and should exercise the power wholly to stamp out all bad germs that could make us sick.

If we grant that presumption, and give over personal volition to an overweening state, there will be no end to the despotism under which we will live…forever. That is because pathogens are everywhere, forever, and thus so too the machinery that purports to control them.

Another real problem from the last 26 months is the lesson that it taught those who long ago stopped believing in the idea of human freedom. They got their way and were handsomely rewarded for it.

The covid years were the greatest triumph of the administrative state since Louis XIV built Versailles. It ballooned out of control, and then fought back when a court dared question its authority.

The administrative state is the meta layer to the political state that imagines itself to be invulnerable to juridical and legislative oversight. It also regards itself as immortal: it cannot die the death no matter who gets elected. This layer of the state has gradually assumed ever more power over the last one hundred years of wars and other crises, including now with pandemic disease.

This meta layer of the state, which operates outside of electoral politics, had a field day with covid, gaining power, issuing edicts, and eliciting new funding. It is not a “conspiracy theory” to observe that this tendency exists and that the state has its own interests that are not always perfectly in accord with the public interest. To dismiss the problem of special interests this way runs contrary to analytical rigor

To deny that the public sector consists of self-interested individuals is itself mystical, ideological, and essentially unscientific. To examine their motivations means facing reality (“politics without illusions”) and doing quality political economy. It is not “conspiracy theory;” it is looking at the reality of politics without the sugar coating.

All states ancient and modern, and their associated interest groups in society (whether the aristocracy or large corporate), search for compelling public rationales for securing their stability of rule over the rest of us. The rationales change through the ages. It could be religious. It could be ideological. It could be fear of the other. Fear of insecurity or hostile attack. Or infectious disease. The latter has proven to be highly effective at attacking liberty at its root.

Among the lessons we should have learned over two years:

There are probably a hundred more lessons here too. Are we really supposed to believe that they do not apply more broadly, that the next pandemic will include none of these dynamics but instead will be about precision, human rights, freedoms, and coherent public health messaging?

Are we really supposed to believe that the interest groups that benefited very recently from fanning the flames of public fear do not and cannot band together in a common interest and even to plan those campaigns ahead of time?

If we rule that out, we are being completely naive, ridiculously so.

Are we really just supposed to forget completely about what just happened to the nation and the world, to go on with our lives and, once again, fully trust the elites to manage our future for us?

We know for certain that this is what they want. As Klaus Schwab said at the WEF: “The future is not just happening. The future is built by us, by a powerful community.”

That said, such people and interest groups would not and could have exercised power over the population if public philosophy upheld principles like freedom, human rights, and public health principles. They instead would be considered ridiculous and dangerous people. The public would laugh derisively at media organs that called for lockdowns. We would denounce the private interest groups trying to browbeat the population into submission. And the public bureaucracies that handed out edicts would find them widely ignored.

The “conspiracy” can only work in the presence of confusion, which is to say that the ultimate answer to protecting freedom lies not just with exposing pressure groups but also in promoting the principles of a good and free society in order to inoculate the public against falling for the plots and schemes of the well connected and powerful.

Therefore, the answer to the question “confusion or conspiracy” is that they are both operating at the same time. The confusion part is the more serious problem because it is the more difficult thing to fix.

Too often, the attempt to observe dangers to public interests, insofar as they are organized into groups, is denounced as paranoia, even when we have the receipts, and even when the groups themselves announce their plans and their goals. Even when we have only recently suffered under the yoke of expert control.

For example, on the very same weekend that the WEF met, also the WHO was ramming through a new treaty that would codify lockdowns as an approved policy, even as Biden raised alarm bells about the Monkeypox and states are already announcing possible quarantines. Are we really not supposed to notice what H.G. Wells called the “open conspiracy?”

It’s impossible not to notice. We’d be fools not to.

So why are those who draw attention to this so heavily criticized? Because calling them out has become a taboo. It is a taboo that should be broken, else trust will never return.

From the beginning of recorded history, the ruling class in all places has plotted, but the extent to which those plots are realized in the direction of history are contingent on public philosophy. So who is to blame when things go wrong, which is to say, when the “conspiracies” actually work? It is all of us.

Human freedom is the public practice of not being trolled by the ruling class, which is forever telling us that life will be better once the most intelligent and most powerful among them are granted all trust to do with our lives and property as they see fit. When we decide that it ends, it ends.