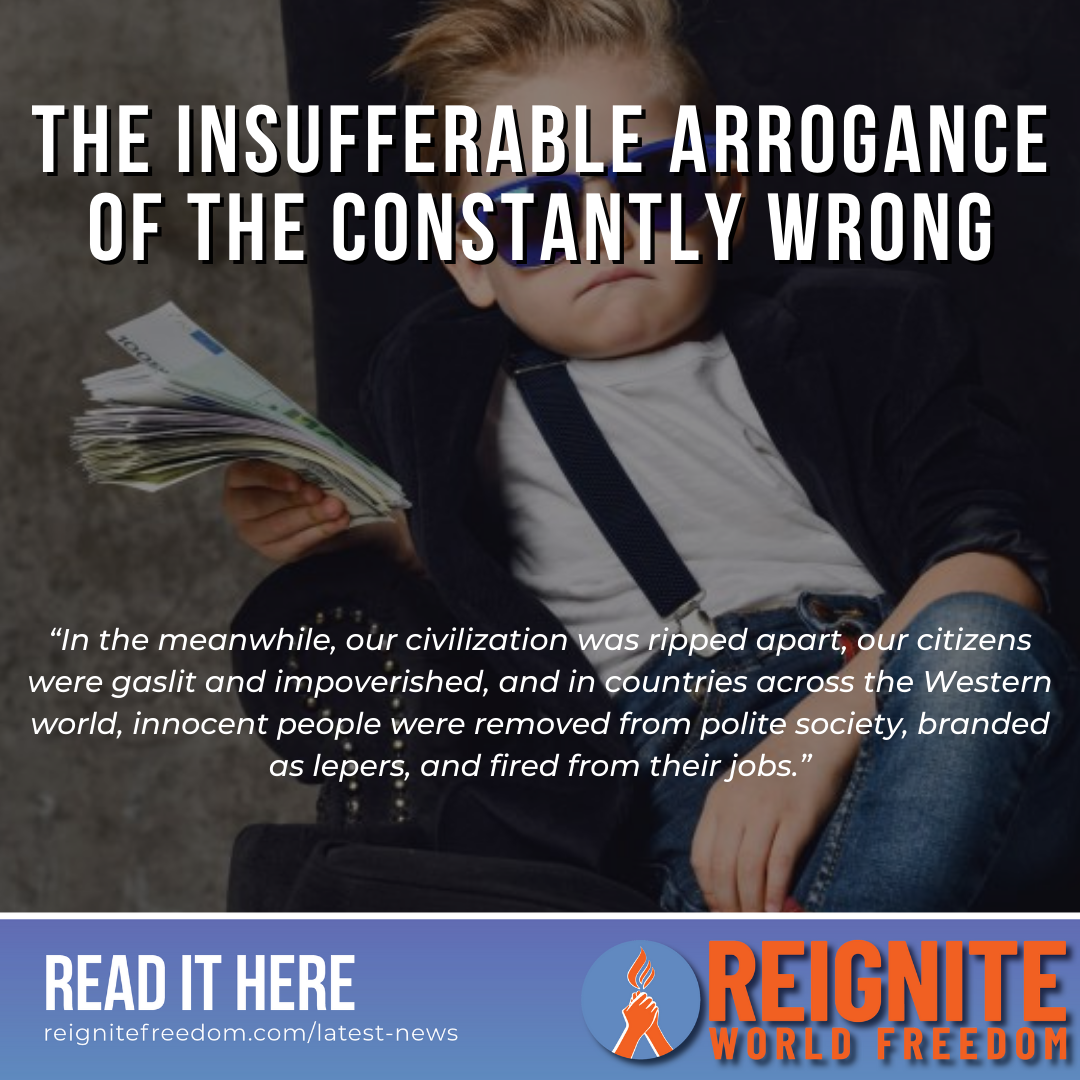 The Insufferable Arrogance of the Constantly Wrong

The media, and the people who work in and around it, the Blue Checks™ of Twitter, have upped the ante over the past few years regarding how far they are willing to go to enforce various preferred narratives.

In the meanwhile, our civilization was ripped apart, our citizens were gaslit and impoverished, and in countries across the Western world, innocent people were removed from polite society, branded as lepers, and fired from their jobs.

Why? Because there is one story that just won’t die and for which no corrections have been issued—the shibboleth that vaccination can prevent infection, transmission, and help “end” COVID.

While there is never an excuse for hateful rhetoric towards, and intervention in, the personal medical choices of law-abiding Americans, perhaps one could have, kinda sorta, understood the campaign if the new vaccines had provided long-lasting immunity and prevented community transmission. They do not.

Early on we were told: “Nine out of ten [vaccinated] people won’t get sick” (Columbia University feat. Run-DMC, February 12th, 2021, no this is not a joke); “Vaccinated people do not carry the virus, don`t get sick” (Dr. Rochelle Walensky, March 29th, 2021); “When people are vaccinated, they can feel safe that they are not going to get infected” (Dr. Anthony Fauci, May 17th, 2021).

And by mid-summer, 2021, we were still being told that unequivocally, these vaccines were a resounding success worthy of uncritical support. On July 27th in Scientific American, Dr. Eric Topol wrote, “Vaccination is the closest thing to a sure thing we have in this pandemic.” Not to be outdone, Dr. Anthony Fauci of the NIAID told CBS on August 1st, that the unvaccinated were responsible for “propagating this outbreak.”

But on July 29th, 2021, the Washington Post reported a scoop that the CDC was privately acknowledging that the vaccinated could spread COVID as easily as the unvaccinated. Occasionally, they are forced to report inconvenient facts. And August 5th, CDC Director Walensky told CNN’s Wolf Blitzer that, “They continue to work well for Delta, with regard to severe illness and death — they prevent it. But what they can’t do anymore is prevent transmission.”

While there is a mountain of medical literature available demonstrating quite clearly the failure of these vaccines to prevent infection and transmission, the August 5th declaration from the CDC Director should have made clear that being vaccinated is contributing in no way to the safety of others, nor to the eradication of this virus.

In fact, Israeli Health Minister Nitzan Horowitz was even caught on tape in September of last year explaining that the use of the Israeli Green Pass wasn’t intended to make a difference epidemiologically, but because it would help convince people to get vaccinated. And even vaccine poobah Bill Gates admitted in a late 2021 interview, that, “We got vaccines to help you with your health, but they only slightly reduce the transmissions.”

So there should be no question that continuing to suggest in any way that these shots are a panacea, and that those who refused to get them were plague spreaders, should have been thoroughly trashed by Fall 2021.

Nonetheless, on September 24th President Joe Biden coined his now famous phrase “a pandemic of the unvaccinated.” To our north, Prime Minister Trudeau called the unvaccinated science deniers, misogynists, and racists, and asked rhetorically whether Canadians should “tolerate” them.

And during the first week of January 2022, while kicking the unvaccinated out of French daily life and public spaces, French President Emmanuel Macron said he wanted the measures to “piss off” his unvaccinated citizens. With world leaders speaking this way, it’s no wonder so many Blue Check™ elites took up the banner!

Prominent media figures like Amy Siskind, Pulitzer Prize winner Gene Weingarten, and more have come out of the woodwork in recent months to share with us their enthusiasm for medical discrimination. Noted neurotic Howard Stern is all in on forced vaccination due to what must be his own debilitating fear of his mortality. Bill Kristol says the unvaccinated have “blood on their hands.”

All of the above links/stories were posted after Dr. Walensky’s unequivocal announcement that the vaccines do not prevent transmission.

And all of the self-satisfied segregationists are supported in their vitriol by the Blue Checks™ of the Medical Establishment, like Dr. Paul Klotman, President and Executive Dean of the Baylor School of Medicine, who said on camera back in January that he isn’t polite to friends and family who aren’t vaccinated. “Keep them away. I don’t do it respectfully, I tell them to stay away, and teach them a lesson.” Less vitriolic but equally problematic, the WHO’s COVID-19 “technical lead” Dr. Maria Van Kerkhove continued to push the lie that vaccination can prevent outbreaks as recently as January 26th, 2022. She is, as well, a Blue Check™. And yes, Dr. Anthony Fauci is still at it, even as of April 14th, 2022, telling MSNBC that harsh Chinese lockdowns could be used to get the population vaccinated so that “When you open up, you won’t have a surge of infections.”

The examples are legion. Blue Checks, Medical Blue Checks, Times Columnists, Radio Jocks, Presidents, and Prime Ministers have all espoused misinformation and/or hate speech regarding vaccination status. But they are all given intellectual cover by the official reporting of the fourth estate. Even in the face of all the evidence that there is no epidemiological basis for discrimination, our intellectual betters in the legacy media press onward the canard.

On August 26th, the Toronto Star ran an article entitled, “When it comes to empathy for the unvaccinated, many of us aren’t feeling it.” Then, on December 22nd, published an explainer which stated that two doses won’t stop you from spreading COVID-19. Comme ci, comme ca.

Back in February, MSNBC political contributor Matthew Dowd shared his insight that the unvaccinated do not believe in the United States Constitution, because if they did, they would get vaccinated for “We The People.” For the common good.

An examination of the New York Times reveals three articles written this year which overtly continue supporting the idea that the vaccines prevent transmission. First, on January 29th in a piece entitled, “As Covid Shots For Kids Stall, Appeals Are Aimed At Wary Parents,” the author cites “public health officials” who say that to aid in “containing” the pandemic, kids must also be vaccinated. (It is worth mentioning that the current vaccines and boosters being distributed were designed in February 2020 to provide an immune response to a version of the SARS-CoV-2 spike protein circulating prior to that, not entirely similar to what is circulating now.)

Then February 23rd, in a hit piece on the Surgeon General of Florida Dr. Joe Ladapo, the Times writes, “When public health officials across the country were urging vaccines as a way to end the pandemic, Dr. Ladapo was raising warning flags about possible side effects and cautioning that even vaccinated people could spread the virus.”

So, Dr. Ladapo was correct?

Finally, in a piece about Novak Djokovic published March 3rd, they write, “Djokovic was the only player ranked in the top 100 in Australia who had not received a Covid-19 vaccination, which experts have long said will not eradicate the virus unless most of the population receives one.”

They do not address the question of how a vaccine which does not prevent transmission can eradicate a virus. And they won’t. As Israeli Health Minister Horowitz candidly admitted, none of this is about epidemiology.

And even when mainstream media tacitly acknowledges the failures of the vaccines to prevent transmission, they skillfully elide the significance of this fact in order to allow them to continue to scapegoat the unvaccinated. In a dazzling display of sophistry, Time Magazine moved the Overton window in this January 12th, 2022 piece, “These Charts Show That COVID-19 Is Still A Pandemic of the Unvaccinated.”

New York Magazine isn’t lacking in similar gymnastics. On February 16th of this year, Matt Stieb published a piece entitled, “Is Kyrie Irving Going to Get Away With It?” Irving is the Brooklyn Nets player who famously chose not to be vaccinated, and has become a fetish object for the Covidian Left. Stieb acknowledges that Irving’s vaccinated teammates were getting COVID at such high rates that it forced Nets management to allow Irving back to play in away games but still calls the New York City ban on unvaccinated athletes “a rare public health mandate with real teeth.”

Just seven days later on February 23rd, Will Leitch, in the same publication, sighs, “Unfortunately, It’s Time to Let Kyrie Irving Play in New York.” He outlines all the reasons why epidemiologically it makes no sense to prevent athletes like Irving and Novak Djokovic from participating, but says, “It would feel like they got away with all their bullshit.” And also, they are “annoying.”

And this barely concealed hatred for the unvaccinated from media and government and Big Tech—even in the rare moments when writers such as Leitch acknowledge the failure of the vaccines to prevent transmission—has real consequences. People have lost their jobs. People have been arrested for trying to go to a movie theater.

Families got kicked out of restaurants, and patrons either cheered or remained indifferent, which is worse. A teenage boy at an uber-progressive and expensive Chicago prep school committed suicide after being bullied over an incorrect rumor he was unvaccinated. The stench of bad journalism rots people’s basic decency.

As well as, “Twenty-nine percent (29%) of Democratic voters would support temporarily removing parents’ custody of their children if parents refuse to take the COVID-19 vaccine.” Unfortunately, these disturbing results are politically lopsided, but it’s no surprise when you consider who the readers of most legacy media platforms are.

The saddest thing is that these media outlets and their flag bearers really think their readers are all morons. The New York Times believes that, in the midst of the Omicron wave as boosted person after boosted person was getting COVID, they could tell you these particular vaccines are still the way to eradicate this thing, and expect you to deny reality and nod your head.

We have ceded the better angels of our common cerebrum to people who may not have our best interests at heart, and a sycophantic laptop class who gleefully endorses their diktats and “fact-checks.” Collectively: Sophistry Inc.

Their behavior, endorsed by every single entity which holds power in our society, is destroying us, and has already poisoned us such that there may be no antidote. Yes, first they came for the unvaccinated, but that doesn’t mean they won’t come for you next.