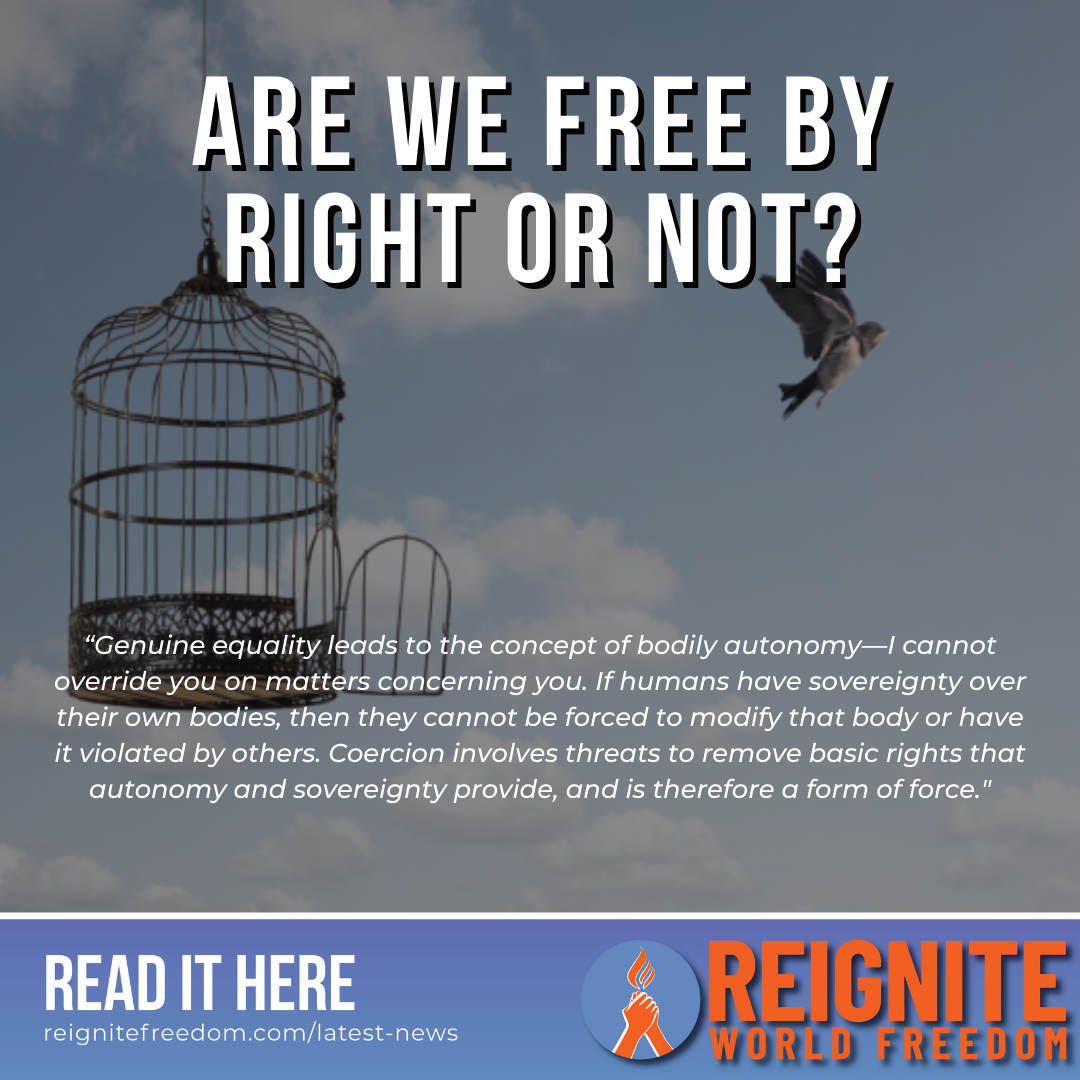 Are We Free by Right or Not?

The temptation through COVID-19 has been to use science or evidence to oppose the removal of our rights. Why should a college student be subject to a vaccine mandate if they already have post-infection immunity, or an unvaccinated person have travel restricted when the vaccinated have higher infection rates? Such approaches are tempting to embrace, as they’re based on logic and thus hard to refute. But they serve those who would remove freedom by reinforcing the fundamental requirements they need to justify their tyranny. They reinforce the tyrant’s requirement that freedom is granted based on actions or status, not the simple reality of one’s birth.

We are free, or we are not. Science and logic cannot be the arbiters of that freedom.

The COVID-19 Crisis Should Awaken, Not Enslave Us

COVID-19 vaccine mandates have highlighted society’s creeping acceptance of anchoring basic human rights to medical status. Like many public health physicians, I accepted, even supported, mandating measles vaccination for school entry. Measles does, after all, kill many globally. I was also fine with hepatitis B vaccination for my workplace. Both vaccines are generally considered safe, and very effective in blocking the target disease. My medical training emphasized that those who were anti-vaccination were equivalent to flat-earthers.

The COVID-19 public health response stepped this up, requiring injections as a prerequisite for both adults and children to participate in normal community activities. “Vaccination status” governed “access” to rights considered fundamental under the Universal Declaration of Human Rights—including the right to work, travel, socialize, and access education. It has even determined the right to access health care. Medical coercion has emerged from the shadows into the mainstream of public health.

The vaccine mandates have been fought with logic. Demonstrating the sheer absurdity of a general mandate for a disease that targets a well-defined population group (old age and co-morbidities), that does nothing to stop spread(i.e., no protection for others), and against which most are already better protected by natural immunity is an easy argument to make.

On the back of such evidence and logic, the movement opposing COVID-19 vaccine mandates, spanning truckers, restaurateurs, hospital employees, and politicians, has made some in-roads in rolling-back mandates. But progress is fragile, as authorities elsewhere seek to strengthen and widen mandates, and entrench the international pandemic preparedness industry that seeks to perpetuate coercion in public health. The frequency of mandates in educational institutions should tell us that something deeper than illogic and anti-science underlies this movement.

Small tactical victories based on logic will not win a war. If health fascism is to be dealt with as was the Nazism of a previous era, highlighting particular logical flaws will not be enough. Nazism was not sidelined because of illogic, but because it was fundamentally wrong. It was wrong because it did not treat all people equally, and it put central authority, and a perceived “collective good,” above the rights, and equality, of individuals.

This is the hill on which we must stand if we are to block the use of public health as a tool to enforce the corporate authoritarian society envisioned by the adherents of the Great Reset. This is a fight that goes beyond public health—it concerns the fundamental status of the human position. It must deny unequivocally the right of one group to control and abuse another. I do not have the right to mandate a high-risk non-immune diabetic 80-year-old to get a COVID-19 vaccine. Neither do you.

Freedom Is a Birth-right, Not a Reward

If we acknowledge that “all humans are born free and equal in dignity and rights” (Article 1 of the Universal Declaration of Human Rights), and that there’s something intrinsically valuable about being “human,” then certain consequences must follow. Attempts were made to reflect these in the flaweddeclarations on human rights developed after World War II, and the earlier Geneva Convention. They are reflected in many religious beliefs, but not exclusive to them. This view considers every human to be of intrinsic, equal, immeasurable, and independent worth.

As an alternate approach, Nazism demonstrated how the justification of coercion and restriction based on a perceived “common good” rapidly eroded society. The road to genocide was paved by doctors, using public health as a veil for self-interest, fear, and an ability to hate.

Picking some middle ground between the two—humans are a little bit special but can be devalued when convenient (convenient to whom?)—doesn’t stand up well to deeper thought. Fundamental worth cannot be restricted by decisions made within time and space.

Genuine equality leads to the concept of bodily autonomy—I cannot override you on matters concerning you. If humans have sovereignty over their own bodies, then they cannot be forced to modify that body or have it violated by others. Coercion involves threats to remove basic rights that autonomy and sovereignty provide, and is therefore a form of force. It seeks to remove a birthright—a part of our being —if we believe that as humans we are born with such intrinsic rights. Such rights and freedoms mark us as more than a biological mass, never the chattels of others or the crowd. This is why we require free and informed consent for medical procedures where a person is in any way capable of providing it.

In consequence, freedom cannot be conditional on medical status or choice of medical procedure. If we are intrinsically free beings, we do not acquire freedom through compliance. Fundamental rights cannot therefore be restricted based on medical status (e.g., natural immunity) or choice of intervention (e.g., testing) or non-intervention. The promotion of such stigma and discrimination is contrary to recognition of these rights.

It remains tempting to take the easy route and oppose COVID-19 vaccine mandates by highlighting the obvious flaws in the science claimed to underlie them. This is a useful tool—the purveyors of illogic and lies should be exposed. But it can only be a tool in demonstrating the falsehoods of others, not the path to a comprehensive solution. We must not feed the underlying disease.

Claiming natural immunity as a sole exclusion from COVID-19 vaccine mandates is no more logical than ignoring it. Immune members of older age groups are still at higher risk than the non-immune healthy young. Age-related risk varies several thousand fold (pdf), and neither vaccines nor natural immunity can bridge this gap. Do we mandate a young fit athlete to be jabbed because she happens to have avoided prior infection, while pretending an obese diabetic previously infected retiree be exempt?

If we are to nuance the risk, what thresholds of age and fitness will be used, and who will set them? How will natural immunity be measured? What type of testing will be used, how frequently and at whose expense? Will vaccine mandates be more acceptable if the vaccine for the next pandemic is available before many become naturally immune? Basing the argument on logic alone feeds the needs of those who would own us, and subjugates us as subject only to the laws of biology, not those of being.

This is not freedom. However well meaning, it’s on the slippery slope that leads elsewhere.

Freedom Has a Cost

Fundamentally, human rights cannot be dependent on compliance with public health officials. Or politicians. Or the whims of philanthropists and their favorite corporations. These rights must be an intrinsic part of being human, irrespective of the circumstance, irrespective of age, gender, parentage, wealth, or health status. Or we are, indeed, just complex chemical constructs with no real intrinsic value. Society, and each individual, must decide.

The COVID-19 public health response highlights the need to re-examine much of what we took for granted in health care. Respecting individual sovereignty doesn’t exclude sanctions on those who intentionally do harm, but the imperative to control society’s response to this underlies thousands of years of development of law. Cases of malfeasance are tested, transparently, in court.

Accepting individual sovereignty doesn’t exclude protections from harm. Certain high-risk countries require evidence of yellow fever vaccination for inbound travel as an outbreak could result in high mortality. In contrast, school mandates for measles vaccination persist despite the vaccine effectively protecting all those who choose to be vaccinated. In the light of recent events, we need to weigh such requirements transparently and carefully, preventing intentional harm to others, but keeping the natural law of the inviolability of humanness paramount.

Sometimes respecting the freedom of others will cost us. The majority may need to swallow a risk for a time. Codifying the process, legalism, and law that expresses fundamental intrinsic human worth gives wisdom time to overcome fear. It’s the insurance that keeps the members of a free society free. Insurance is the inescapable recurrent cost that protects from occasional, but inevitable, catastrophe. Enslavement in a medico-fascist society could become a catastrophe with no exit. So in opposing it, no quarter should be given.