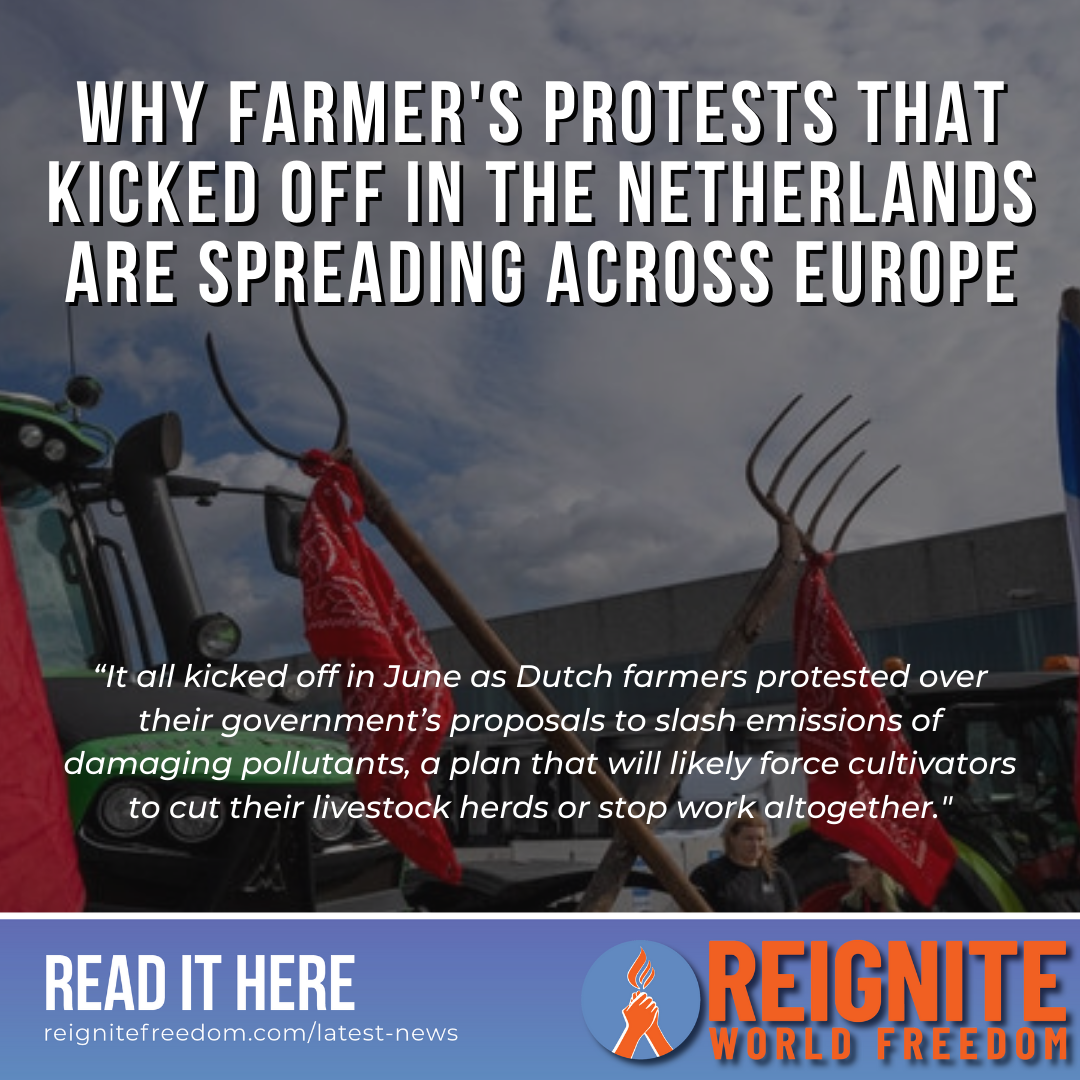 The following article from FirstPost

A farmers protest that began in The Netherlands over proposals to slash emissions has spread to other parts of Europe with cultivators in Germany, Italy, Spain and Poland taking to the streets in solidarity with their counterparts.

It all kicked off in June as Dutch farmers protested over their government’s proposals to slash emissions of damaging pollutants, a plan that will likely force cultivators to cut their livestock herds or stop work altogether.

Let’s take a closer look at what happened in the Netherlands and why the protests are spreading across Europe:

Some 40,000 farmers gathered in June in the central Netherlands’ agricultural heartland to protest the government’s plans. Many arrived by tractor, snarling traffic around the country.

Days later, farmers again took their protests to crowded highways, driving slowly along the roads or stopping altogether. Some have dumped hay bales on roads, and small groups demonstrated at town and city halls, in some cases starting bonfires outside the buildings.

Some farmers set hay bales ablaze alongside highways, while others gathered in towns and cities, including The Hague.

The Dutch government was forced to act after a series of court rulings that blocked infrastructure and construction projects because of fears they would cause emissions that breach environmental rules. It is giving provincial authorities a year to work out ways to meet the emission reduction targets.

The government says emissions of nitrogen oxide and ammonia, which livestock produce, must be drastically reduced close to nature areas that are part of a network of protected habitats for endangered plants and wildlife stretching across the 27-nation European Union.

Dutch farmers say that they are being unfairly targeted as polluters while other industries, such as aviation, construction and transport, also are contributing to emissions and face less far-reaching rules. They also say the government is not giving them a clear picture of their futures amid the proposed reforms.

As per The Scottish Farmer, supermarkets are running out of food as the protests continue to intensify. This, as fishermen have been blocking ports and several ships honking their horns to express their discontent over inflation.

Meanwhile, German farmers blockaded roads on the border with the Netherlands and gathered in large numbers to protest near the city of Heerenburg.

As per The Deep Dive, German farmer groups are themselves upset over a recent renewable energy Act amendment by parliament, claiming it does not provide enough support for biogas production.

“It is completely incomprehensible that in the middle of this far-reaching energy crisis, a sustainable domestic energy source such as biogas is being curbed in the production of electricity, heat, and biomethane,” Bernhard Krüsken, secretary-general of the German Farmers’ Association, told the website.

As per the website, Polish farmers also rose up in protest over the cost of fertiliser and cheap food imports being allowed and thus increasing local production costs.

The farmers took to the streets of Warsaw shouting: “Enough is enough! We won’t let ourselves be robbed!” and “We workers cannot pay for the crisis created by politicians!”

In Spain, farmers blocked highways in the southern region of Andalusia to protest against high fuel prices and the rising costs of essential products, as per The Scottish Farmer. In Milan, Italian farmers in a convoy of tractors blocked city traffic, as per Morning Star Online.

This comes in the backdrop of Italian farmers facing a severe drought that has put a third of agricultural produce at risk.

As per Hindustan Times, the EU Parliament in an move to seemingly pacify farmers issued a resolution denouncing India’s “distorting” sugar subsidies, claiming it was against WTO agriculture agreement and detrimental to the EU sugar producer.

Shishir Gupta, writing in Hindustan Times, warned that ongoing farmer protests, in the backdrop of Russia’s invasion of Ukraine, would impact food supply chains and “deliver a double whammy on world economy.”

“Faced with growing protests, the EU will have to balance its food security with the green environment or else not only the repercussions of this agitation will hit at the global food chain and drive inflation further in affected countries,” Gupta wrote.

“With oil prices at an all-time high due to sanctions on Russia and West Asia oil producers making a windfall profits by curtailing production, any hit at the global food supply chain will sink smaller economies and Sri Lankan crisis will be replicated in other continents,” Gupta warned.

What is the Dutch government proposing?

The ruling coalition wants to cut emissions of pollutants, predominantly nitrogen oxide and ammonia, by 50 per cent nationwide by 2030. Ministers call the proposal an “unavoidable transition” that aims to improve air, land and water quality.

“The honest message … is that not all farmers can continue their business,” and those who do will likely have to farm differently, the government said in a statement this month as it unveiled emission reduction targets.

Livestock produce ammonia in their urine and faeces. The government in the past has called on farmers to use feed for their animals that contains less protein as a way of reducing ammonia emissions. The problem is compounded in the Netherlands, which is known for its intensive farming practices, with large numbers of livestock kept on small areas of land.

It is not only farmers being targeted.

As tractors gathered outside the parliament building in June, Netherlands’ prime minister Mark Rutte said farmers have the right to protest but not to break the law.

What are the nature areas that are threatened?

The government has published a map with reduction targets across the country based on proximity to areas designated as part of the EU’s Natura 2000 network of vulnerable and endangered plant and animal habitats.

On its website, the European Commission says conservation and sustainable use of Natura 200 areas is “largely centred on people working with nature rather than against it. However, Member States must ensure that the sites are managed in a sustainable manner, both ecologically and economically.”

Dutch farmers argue that other EU countries are not clamping down on the agricultural industry as hard as the Netherlands.

During a protest, a group of farmers at a Dutch Natura 2000 region near the German border put up flags and a “Welcome to Germany” sign to symbolically make it part of the neighbouring country.

How important is agriculture to the Dutch economy?

Agriculture — from dairy farming to growing crops in fields and greenhouses — is a significant part of the Dutch economy.

According to a national farming lobby group, LTO, there are nearly 54,000 agricultural businesses in the Netherlands with exports totalling 94.5 billion euros in 2019.