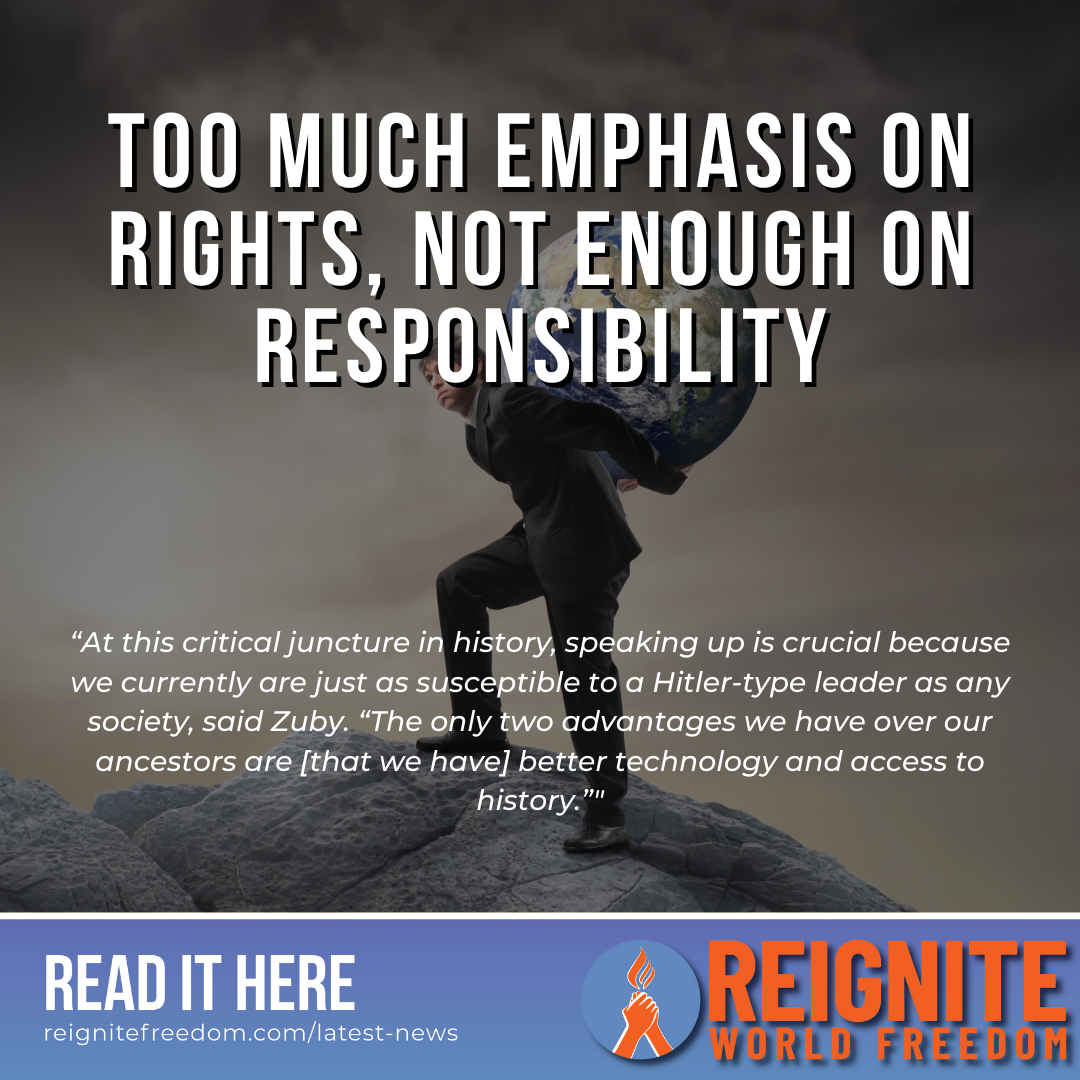 Too Much Emphasis on Rights, Not Enough on Responsibility

The following article from the Epoch Times

Rapper, author, fitness coach, and political commentator Zuby says that his faith and life experiences have equipped him to speak out against dangerous and irrational trends, such as the left advocating for personal rights without holding people responsible for their choices.

“This is a message that I wish were pushed more,” Zuby said during an interview with EpochTV’s “American Thought Leaders.” “I think we talk too much now in the West about rights, not enough about responsibility. And talking about rights is really important; I talk about rights a lot, but you always have to couple it with responsibility, because with every right comes a responsibility.”

He said there is a tendency for progressives to blame everything that happens to a person, especially a non-white person, on their environment, saying they’re being victimized, and not holding that person responsible for their choices.

“So if someone commits a crime, or somebody does something that’s bad or wrong, it’s purely because of environmental and social factors. And if we just had this thing in the right place [progressives think], then that person wouldn’t have done it. It almost goes against this idea of free will,” said Zuby.

“I think this is an attractive thought, number one because it allows people to deny personal responsibility. But also, because there is some truth in it, but they make it absolutist,” he said. “You don’t choose the cards you’re dealt, but you can choose how you play the hand, especially over the course of multiple decades.”

Zuby believes that when people make decisions without considering personal responsibility it leads to the erosion of society.

“It will be outsourced to the state, it will be outsourced to somebody else who can then have control over you and manipulate you,” he said Zuby. This stands for all major issues, from gun rights to abortion. The people on the left are only focused on a woman’s right to choose an abortion but don’t talk about personal responsibility for becoming pregnant in the first place, he added.

Taking the Easy Way Out

Zuby believes that people on the left should be honest with their arguments for abortion, and not use it to avoid personal responsibility.

“We all know how babies are made. There are various options, there is abstinence, there is contraception, there is parenthood, there is adoption, those four choices, morally, are all fine. There’s nobody getting killed in any of those choices,” said Zuby.

He likened abortion to slavery, as both are abhorrent, he said.

“When you erode personal responsibility, and you give people an easy out for everything, essentially, then they are going to adjust their behaviors accordingly, en mass,” said Zuby.

“Alright, let’s be honest, there’s a lot of people who just think, oh, you should be able to do whatever you want, exercise every right, have none of the responsibilities, suffer none of the consequences,” added Zuby.

Being hyper-focused on rights and peoples’ feelings is only fueling more problems, said Zuby.

One of the most immoral things happening is the indoctrination of young children with gender ideology, said Zuby.

“People are saying that 11-year-olds, 10-year-olds, 8-year-olds can make extremely serious and life-altering permanent decisions about themselves,” said Zuby.

“And you’re seeing it happening in schools, maybe it started in the universities primarily, but it’s trickled down now to kindergarteners, to 6-year-olds, people wanting to teach 6-year-olds about all kinds of sex and sexuality-related topics and so on,” said Zuby.

Zuby said he has been following the transgender issue since 2015 because he was concerned about its impact on women and children.

“I was saying, well, this is inevitably going to lead to men identifying as women and entering their private spaces or even competing against them in sport, and so on and so forth,” said Zuby. And his friends were calling him alarmist but that is exactly what is happening now, he said.

“On the very first song on my very first album, I have a lyric where I say my ideas are inconceivable, like men giving birth,” said Zuby. “And we’re literally living in a time now where people are advocating and arguing that men can indeed give birth.”

Additionally, the so-called “transgender story hours” in schools concern Zuby. He thinks that people who support this transgender ideology, have disregarded children’s safety and well-being by allowing young children to be sexualized.

“How is that even a reality? Why am I seeing videos of grown men, men, by the way, dancing for little kids and then throwing money at them or little kids dancing for grown men in gay clubs? How on earth? Can anyone look at that and say, oh, yeah, that’s good?” said Zuby.

Common Sense in an Absurd World

Zuby said since the start of his freelance career he has always been rooted in common sense but the left has become more unreasonable and radical in its ideology.

Zuby believes modern society has eroded to the extent it has because people don’t believe there are fundamental truths, including that there are two biological sexes that are inherently different.

“If you can make people believe absurdities, you can get them to commit atrocities, and we’ve seen this play out multiple times over the centuries,” said Zuby.

Like the absurdity that men can give birth, said Zuby. The truth is that there are only two sexes, “and that yes, there’s an overlap in roles, but they are different. And there are certain roles that are unique to each sex; every single person on this earth was birthed from a woman, all of us, every human who’s ever walked the planet,” said Zuby.

Zuby criticized academia, for becoming places of indoctrination instead of learning, something that has caused society to become debased, he said.

“When I say debased, I mean, unmoored and unrooted, from objectivity and reality and wholesomeness and righteousness and goodness, and morality.”

Progress is good when society is rooted in solid moral truths, whether that be religion or other higher truths. If not, people will be disoriented and look for something to fill that gap, said Zuby.

“Because when people are trying to orient themselves, they tend to look up. So, if there’s some maniacal figure or dictator type of person, or authoritarian, who is then giving them [a narrative], it’s easier to sell people on a narrative that way,” said Zuby.

“I mean, if you look at the conditions that led to the rise of someone like Hitler, it was that you look at the situation that the German society was in post-World War I, and leading up to that, people were disoriented,” said Zuby.

Ending the Pandemic of Cowardice

The reason society is such as mess is because people are afraid to speak.

“But we combine this with an epidemic, what I call a pandemic of cowardice, where people who even know the truth are afraid to say it,” said Zuby.

Consequently, governments were able to manipulate people during the pandemic because people were disoriented and afraid, said Zuby.

At this critical juncture in history, speaking up is crucial because we currently are just as susceptible to a Hitler-type leader as any society, said Zuby. “The only two advantages we have over our ancestors are [that we have] better technology and access to history.”

“You know, people don’t necessarily want to be right, they want to be in the majority,” said Zuby. Most people take the least difficult path and stay silent on issues, even if they know what is being done is incorrect or harmful to society.

Speaking out against the popular narrative, initially, takes courage but becomes easier the more you do it, said Zuby.