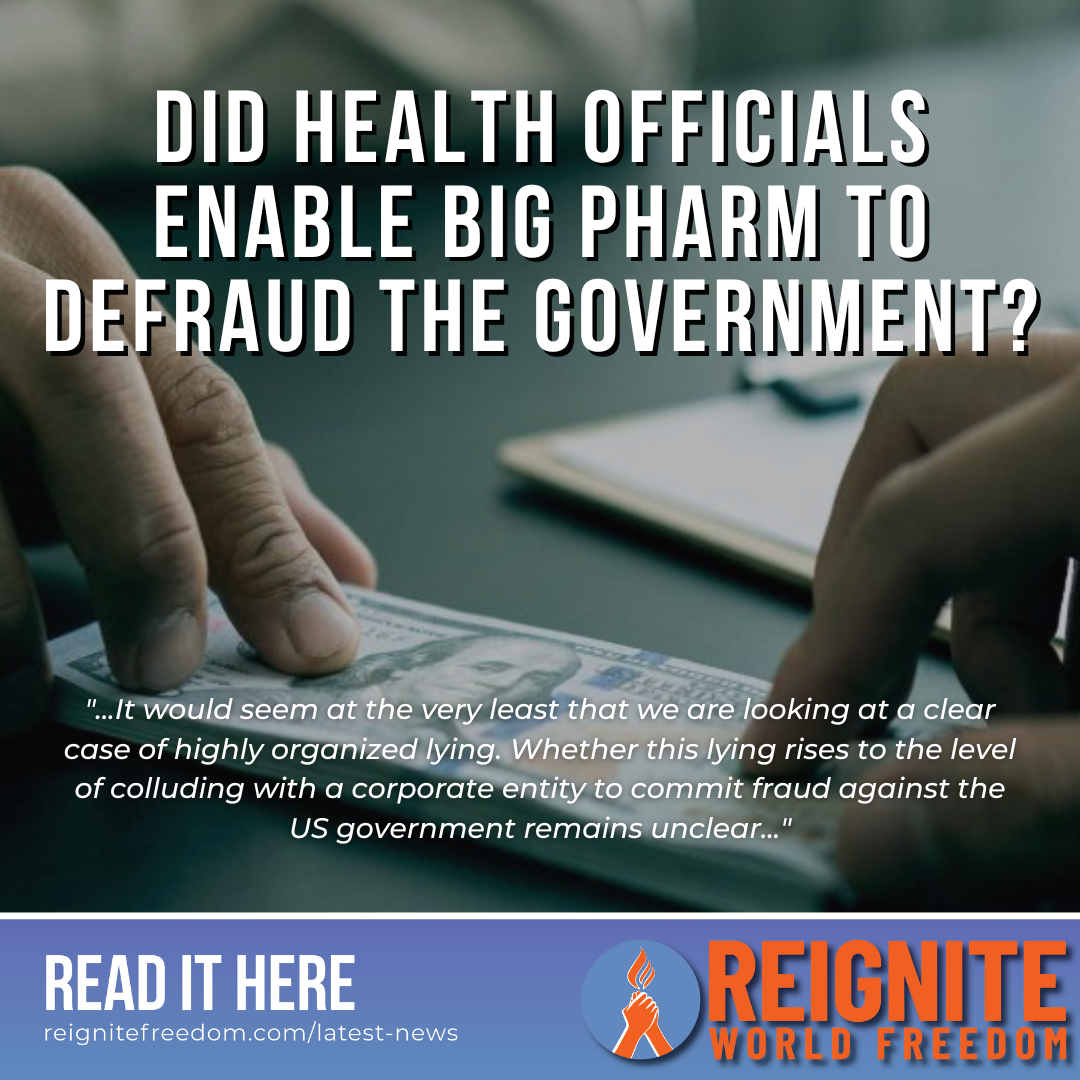 Did Health Officials Enable Big Pharm to Defraud the Government?

The following article from the Brownstone Institute

Perhaps no phrase has been used with greater persistence by government officials and agencies during the last 20 months than “safe and effective.”

During this time Drs. Fauci and Walensky have used it again and again in public appearances to summarize the most supposedly essential characteristics of the MRNA vaccines that were offered to the American public beginning in January 2021, and forced on them though government and employer mandates starting in the early fall of the same year.

This same description of the MRNA injections has been repeated endlessly in the mainstream media and in public service announcements like this, funded with taxpayer money.

But what if the vaccines were not safe and effective? And what if the government spokespeople and agencies who repeatedly characterized them as such had very good reason to know that these assertions were not actually rooted in empirically demonstrated results?

Would it not be fraudulent to state blithely and repeatedly from government platforms that this was flatly true—thus fattening Pharma revenues—when, in fact, the manufacturers of the product being offered and then imposed upon the American public stated repeatedly that there was no factual basis for making this assertion?

From what I have been able to understand as a non-lawyer, the US legal code sees fraud as something overwhelmingly done to the government rather than something committed by it.

However, 18 U.S. Code § 201 – Bribery of public officials and witnesses, would seem to provide (please chime in all you lawyers out there) at least one possible route for going after government officials who repeatedly made untrue claims about the known safety and effectiveness of the injections.

It states that : “Whoever, being a public official or person selected to be a public official, directly or indirectly, corruptly demands, seeks, receives, accepts, or agrees to receive or accept anything of value personally or for any other person or entity, in return for: (A) being influenced in the performance of any official act; (B) being influenced to commit or aid in committing, or to collude in, or allow, any fraud, or make opportunity for the commission of any fraud, on the United States.

The Language from Foreign Contracts

As has been noted, US officials repeatedly recurred to the “safe and effective” mantra when seeking to stimulate vaccine uptake among the citizens of this country.

However, in the vaccine contracts Pfizer signed with the European Commission and numerous countries (Albania, Brazil, Colombia Chile, the Dominican Republic and Peru)—documents which were supposed to have stayed secret but were eventually leaked to the press—the pharmaceutical giant invariably includes the following clause.

How can this be squared with the no-room-for-doubt rhetoric of “safe and effective” which we have heard ad nauseam over the last 20 months?

But given the size and importance of the US market and the enormous negative consequences for Pfizer in the case of clear-cut problems with either safety or efficacy (which have in fact occurred) there is every reason to assume the US contract(s) contain this same out-clause regarding the unproven nature of the injections’ safety and efficacy.

One would have to believe, moreover, that Drs. Fauci and Walensky would have been privy to the language on the lack of clear proof about safety and efficacy included in the US contract. And yet they repeatedly told the public, directly, and in the case of Walensky, indirectly through materials released to the public by her agency, that the injections were, without a doubt, safe and effective.

Which brings us to the matter of their “being influenced to commit or aid in committing, or to collude in, or allow, any fraud, or make opportunity for the commission of any fraud, on the United States.”

Presuming the wording on the lack of substantial proof for the safety and efficacy of the injections was present in the US Pfizer contract, and they were aware of it, their repeated assertions to the contrary in public and through the organs they controlled are mendacious in the extreme.

And it would seem self-evident that—and this perhaps gets us closer to the matter of colluding in fraud—their “safe and effective” rhetoric greased the skids for the widespread acceptance in political and media circles of the signing of Pfizer’s massive new contract with the US government signed at the end of June of this year.

The larger question is whether they or anyone else in the leadership cadres of the NAID, the CDC of the FDA can be said to have “directly or indirectly” demanded, sought, received, accepted or agreed to receive or accept anything of value personally  in exchange for their serial misrepresentation of the known safety and performance profile of the Pfizer jabs.

It would seem at the very least that we are looking at a clear case of highly organized lying. Whether this lying rises to the level of colluding with a corporate entity to commit fraud against the US government remains unclear.

In light of this, now would seem to be a time, if nothing else, to redouble our efforts to obtain as much of the correspondence between Pfizer and top US health officials as we can, and to ask people much more legally expert than me if there is any basis for pursuing this putative case of fraud in the courts.