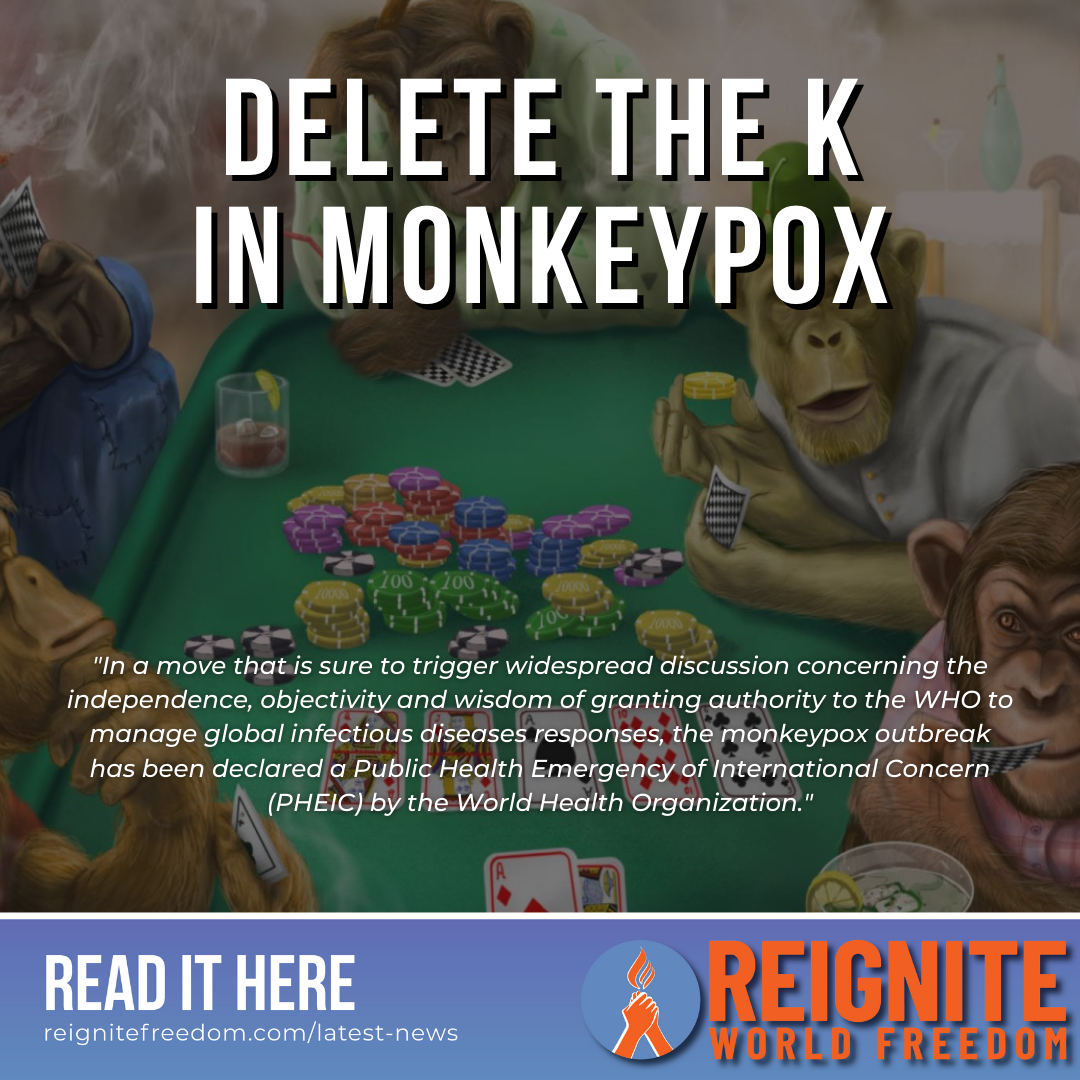 Delete the K In Monkeypox

n a move that is sure to trigger widespread discussion concerning the independence, objectivity and wisdom of granting authority to the WHO to manage global infectious diseases responses, the monkeypox outbreak has been declared a Public Health Emergency of International Concern (PHEIC) by the World Health Organization.

The declaration was made unilaterally, in direct contradiction of independent review panel advice, by WHO director Tedros Adhanom Ghebreyesus. Tedros made the declaration despite a lack of consensus among members of the WHO’s emergency committee on the monkeypox outbreak, and in so doing overruled his own review panel, who had voted 9 against, 6 for declaring the PHEIC. Tedros asserted that this committee of experts (who met on Thursday) was unable to reach a consensus, so it fell on him to decide whether to trigger the highest alert possible.

Any objective outside observer would conclude that the committee failed to endorse moving to a PHEIC. When a similar meeting was previously held on June 23, 2022, the committee resolved by consensus to advise the WHO Director-General that at this stage the outbreak should be determined to not constitute a PHEIC. An official United Nations article summarizing this can be found here.

When the group met in June, the breakdown was 11 against and three for. It is not clear what has changed in the intervening four weeks to justify the change in Tedros’ position, although comments from internet pundits raise concerns that the unilateral action was taken in response to pressure from special interest advocacy groups.

There has also been a sudden burst of coordinated social media postings raising concerns regarding Monkeypox risks to children, which raises the question “If Monkeypox is a sexually transmitted disease, why are kids getting it?”

On Friday, the U.S. confirmed the first two cases of monkeypox in children, Centers for Disease Control Prevention and Control (CDC) Director Rochelle Walensky said Friday. The CDC has said children, especially those under 8 years old, are among those at “especially increased risk” for severe monkeypox disease.

At a virtual event with the Washington Post on Friday focused on new coronavirus variants, Walensky stated that:

“Both of those children are traced back to individuals who come from the men-who-have-sex-with-men community, the gay men’s community,”

Clearly, the WHO committee did not reach the desired decision to declare a PHEIC, and so for some extraordinary reason Tedros stepped in.

Though the committee does not formally vote, a survey of the members revealed that nine thought a PHEIC should not be declared and six supported a declaration. “Nine and six is very, very close,” Tedros said in a news conference called to announce the decision. “Since the role of the committee is to advise, I then had to act as a tie-breaker.”

Tedros made the declaration despite a lack of consensus among members of the WHO’s emergency committee on the monkeypox outbreak. It’s the first time a leader of a UN health agency has made such a decision unilaterally.

In the event of a deadly disease outbreak, a group of World Health Organization (WHO) experts can declare a “public health emergency of international concern,” or PHEIC, to trigger global action. Since the procedures to declare a PHEIC were implemented in 2005, the WHO has only done so six times. The last time the WHO declared an international emergency was in early 2020, for Covid-19.

The designation of a Public Health Emergency of International Concern is the WHO’s highest alert level. It is based on international health regulations established in 2005, to define countries’ rights and obligations in handling cross-border public health occurrences.

The WHO defines a PHEIC as “an extraordinary event which is determined to constitute a public health risk to other States through the international spread of disease and to potentially require a coordinated international response.”

The WHO further explains how this definition implies a situation that is serious, sudden, unusual or unexpected; carries implications for public health beyond an affected country’s border and may require immediate international action.

Tedros’ statements clearly demonstrate that he unilaterally substituted his own opinions for those of the convened panel, raising questions of his objectivity, commitment to process and protocol, and whether he has been unduly influenced by external agents:

“WHO’s assessment is that the risk of monkeypox is moderate globally and in all regions, except in the European region where we assess the risk as high”

“We have an outbreak that has spread around the world rapidly through new modes of transmission about which we understand too little and which meets the criteria in the international health regulations,” Tedros said.

“I know this has not been an easy or straightforward process and that there are divergent views among the members” of the committee,” he added.

As the outbreak continues to grow, epidemiologists are split as to whether the WHO’s decision was correct. The meeting was the second time the emergency committee convened, after a meeting on June 23 when it decided the outbreak had not met that threshold.

“It is a tricky decision for the committee, in some senses, it meets the definition — it is an unprecedented outbreak widespread in many countries and would benefit from increased international coordination.

On the other hand, it seems to be an infection for which we have the necessary tools for control; most cases are mild and the mortality rate is extremely low”

The PHEIC designation comes from the International Health Regulations (IHR) created in 2005, and it represents an international “agreement” to help the prevent and respond to public health risks that have the potential to spread around the globe.

These are the same IHR which the Biden administration sought to further strengthen, but the attempt to implement proposed modifications were placed on hold after an international, multi-country outcry concerning loss of national autonomy. The unilateral actions of Tedros in this current situation clearly demonstrate that these concerns were warranted.

Despite the statement by the US CDC, the WHO IHR are not a treaty which has been endorsed by the US Senate, and the assertion that these are legally binding has been challenged.

In an article supportive of the declaration, Vox news provided a summary of the potential financial beneficiaries of this declaration; that being vaccine manufacturers and the holding companies who have invested in them.

The emergency ought to get countries to share vaccines. But it’s not guaranteed.

Vaccination plays a key role in controlling monkeypox transmission during an outbreak, and crucially, these vaccines already exist.

The Covid-19 pandemic taught the world some painful lessons about the importance of global coordination to ensuring fast and equitable vaccine distribution. The PHEIC alarm bell hopefully will spur action so the same mistakes are not repeated.

A major reason global health experts have been anxious over the timeliness of a WHO emergency declaration for monkeypox is the declaration’s potential to get vaccines to the most vulnerable groups quickly.

Vaccines do exist to prevent monkeypox, and while many countries have a quantity of these vaccines on hand as part of their national stockpiles, US demand has greatly outpaced supply, and the global supply of vaccines is relativelysmall.Countries have been scrambling to order more vaccines, and while the producer of the most popular monkeypox vaccine has not disclosed which countries have put down orders, the nations that have announced vaccine purchases have generally been higher-income ones, like Germany, Britain, and Canada.

That portends a pattern of vaccine inequity that unfolded to tragic effect during the Covid-19 vaccine rollout, with poorer countries struggling to acquire vaccines and cut off from vaccine production efforts. In his announcement of the WHO’s Emergency Committee’s plan to convene in June, WHO Europe director Hans Kluge said following a more equitable blueprint for monkeypox vaccine distribution would be a key step in controlling the outbreak.

“A ‘me first’ approach could lead to damaging consequences down the road if we do not employ a genuinely collaborative and far-thinking approach,” Kluge said. “I beseech governments to tackle monkeypox without repeating the mistakes of the pandemic — and keeping equity at the heart of all we do.”

The ACT Accelerator, a collaboration to raise funds to distribute Covid-19 tests, therapies, and vaccines to low-resource countries, was an attempt at an equitable solution in the pandemic. However, in the eyes of many, it did not succeed. Public health experts are hopeful earlier action on monkeypox could avoid some of the ACT Accelerator’s pitfalls.

In its announcement today, WHO representatives said it was encouraging countries with large vaccine stockpiles to share and donate vaccines to other countries who do not currently have access to vaccines.

“There’s no way to enforce that globally,” Heymann said.

Please see previous coverage of this issue, which clearly demonstrate the concerted effort to weaponize fear by a variety of stakeholders including corporate media and Bill and Melinda Gates affiliated organizations.