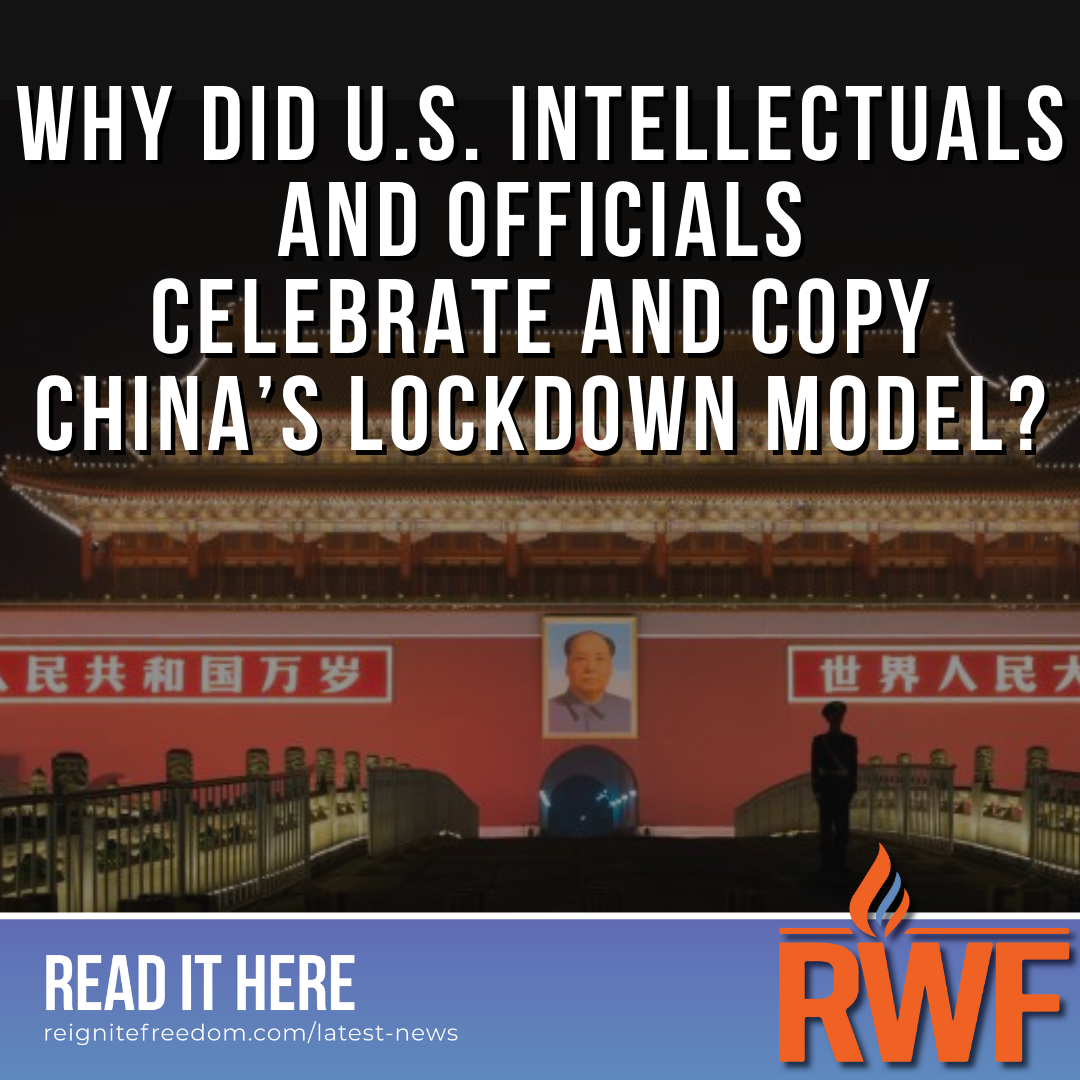 Why Did U.S. Intellectuals and Officials Celebrate and Copy China’s Lockdown Model?

Article from the Brownstone Institute

In Hannah Arendt’s report on Adolf Eichmann, one of the chief architects of the Holocaust, Arendt concludes that Eichmann was no unique monster but rather a very bland individual who never developed any moral center outside of the groups to which he belonged, and had been motivated primarily by blind dedication to the goals and incentives of the Nazi regime. Arendt coined this “the banality of evil.”

In our own time, “the banality of evil” could just as easily be “the banality of intelligence failures.” As Dr. Scott Atlas, former advisor to the White House coronavirus task force, observed:

The behavior of the United States and the Western world to this virus is just an obvious indication of how to bring the United States to its knees… And this is very frightening because if I were China—and I’m not a foreign policy person, but this is so obvious to me—anyone, North Korea, if they release a virus or even say there’s a virus, ‘Look, it’s killing our people,’ the United States shuts down immediately… There is no American strength in my view of its people to say no. We can’t even say no to having a five-year-old being mandated to have a mask on his face for eight hours a day.

I’d like to nominate Scott Atlas for “foreign policy person.” In this short quote, Atlas summarizes a gaping national security hole that, to this day, appears to elude our leading think tanks and officials. For all the trillions of dollars that NATO spends on military and cybersecurity hardware, much of which is meant to protect us from China, those in charge of our response to Covid have shown a staggering credulity in swallowing data and information about the virus—and about the effectiveness of totalitarian mandates in combating it—from our chief geopolitical adversary.

Worse yet, not only did the Chinese Communist Party exploit this fact during Covid, but they appear to have spent years deliberately boring this hole in our national security bureaucracy prior to doing so. The CCP carefully cultivated the World Health Organization over a decade, and there’s a growing mountain of evidence that they made significant headway in cultivating the health and security bureaucracies of many member nations as well. The fact that the pandemic plans of these nations were simply discarded to make way for lockdowns—and the public was neither consulted nor informed of this decision—suggests that the corruption may have run quite deep.

In fact, across institutions, the closer one gets to centers of power during the response to Covid—in government, media, and academia—the more likely the institutions and individuals have been to toe the CCP’s Party line by insisting that China’s farcically-forged Covid data is real. As a reminder, this is the narrative on which officials like these have been basing their guidance: A supervirus emerged that was so deadly only Chinese totalitarianism could stop it; it caused mass death in Wuhan (but nowhere else) until Xi’s two-month lockdown of Wuhan eliminated it from all of China (but nowhere else), where a steady stream of “variants” now demand indefinite restrictions. And this is the data that officials like these have been instructing the world to try to emulate:

It's shocking to see the US overtake China in number of #coronavirus cases as some governors, our President downplay the threat and promise an end to social distancing by Easter. Lies, misinformation, incompetence will kill hundreds of thousands before this is over. pic.twitter.com/AQy3lBQ2XJ

This problem is far from limited to the United States. In fact, outrageously, in the UK Parliament’s official report on what went wrong during the response to Covid, Parliament praises the information furnished by Lancet Editor-in-Chief Richard Horton and WHO leader Bruce Aylward to conclude that if the UK had gone into strict lockdown three days sooner, catastrophe would have been averted. This is the same Richard Horton who penned a full-throated tribute to the CCP for ending China’s “century of humiliation,” and the same Bruce Aylward who refused to acknowledge Taiwan’s existence on a live call. Thankfully this Government wasn’t in charge during the Battle of Gallipoli, else they’d have concluded that the battle would have been won if only they’d invaded three days sooner.

Here’s Bruce Aylward toeing the Party line—one of the most despicable moments of the entire Covid story.

Here’s SAGE advisor Susan Michie toeing the Party line—as one might expect, given she has been a member of the British Communist Party for decades.

Of course we see the same in Canada as well. Here’s former Health Minister Patty Hajdu toeing the Party line.

Some comments are even more curious. Some leading health officials have expressed a desire to use the response to Covid to build a new “cultural hegemony” and undo “cultural homogenization” brought about by “colonialism”—a goal that would appear to have little to do with health.

On the advice of officials like these, western nations imported the concept of “lockdown”—one of the most hideously totalitarian policies ever conceived—which had been pioneered by the dictator of China just two months prior. They then spent two years importing an ever-darker swathe of illiberal mandates, all in the supposed interest of “public health.” Countless businesses were ruined, human rights were upended, children lost years of education, millions starved, the mental health of billions was strained, and trillions in wealth was transferred from the world’s poorest to the very richest—all while failing to slow the spread of a virus that was subsequently confirmed to have an infection fatality rate under 0.2%.

It’s unacceptable that our chief geopolitical adversary has had two years to reshape western civilization in much the way they would if they’d already won a conventional war against us. The fact that a dictatorship undermined our national security so easily is an inadequate reason for our children to have to live with these totalitarian precedents; on the contrary, the fact that the dictatorship was able to do so with such efficiency only highlights the risk and reinforces the need for this influence to be stopped.

This failure is even more astonishing because it’s already widely known in the intelligence community that the CCP’s primary focus is on information warfare—“superseding their cultural and political values” to those of the west and undermining the western values that Xi Jinping sees as threatening, outlined in his leaked Document No. 9: “independent judiciaries,” “human rights,” “western freedom,” “civil society,” “freedom of the press,” and the “free flow of information on the internet.” That intelligence officials somehow haven’t noticed just how far the CCP advanced this goal over the last two years is an unforgivable and bewildering oversight.

Or perhaps not so bewildering, given that our very own Director of National Intelligence was sitting right next to China’s CDC Director at Event 201—the first of not one, but two high-level pandemic planning scenarios in as many years the facts of which happened to come true just months later. That the fact pattern of the Monkeypox simulation came true in mid-May—the exact week of the exact month predicted by the simulation—shows that this problem is far from fixed.

The conundrum that our officials appear to find so paradoxical is that fixing this problem in our national security would mean admitting that there’s a problem to be fixed, which would first require admitting error in implementing lockdowns in the first place, something they can’t do without inconveniencing their political careers and social lives. This is a level of patriotism roughly equivalent to spitting on the graves of everyone buried at Arlington Cemetery.

It’s time to start turning over the tables. This is not negotiable. It’s long past time for intelligence personnel to start asking why health officials and media outlets have shown such credulity in using information from the world’s worst dictatorship. If the intelligence officials won’t do it, politicians have to make them do it. If the politicians won’t do it, toss them out and find ones who will.