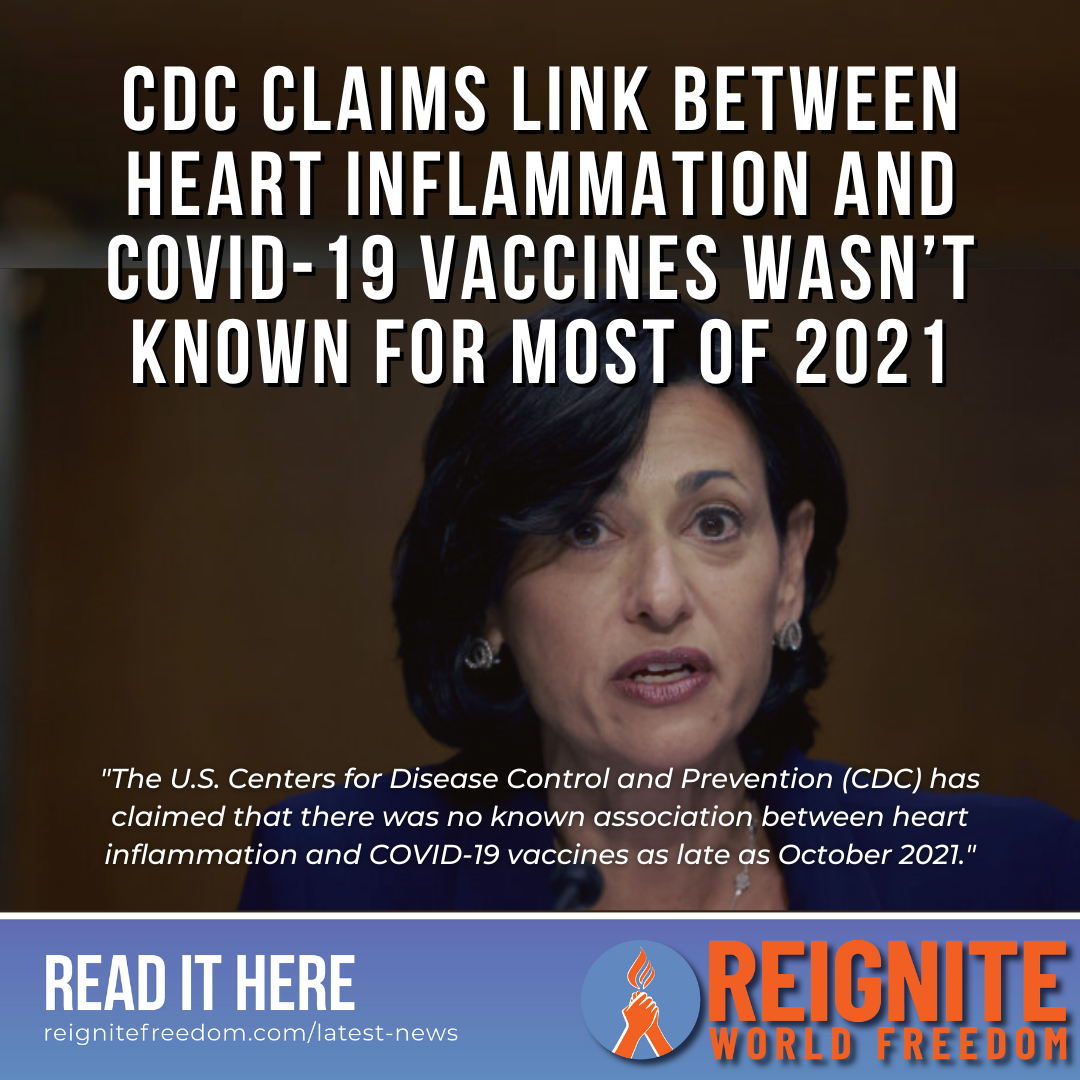 (PICTURED: Dr. Rochelle Walensky, director of the Centers for Disease Control and Prevention, speaks in Washington on June 16, 2022.)

The following article from Epoch Times

The U.S. Centers for Disease Control and Prevention (CDC) has claimed that there was no known association between heart inflammation and COVID-19 vaccines as late as October 2021.

CDC officials made the claim, which is false, in response to a Freedom of Information Act request for reports from a CDC team that is focused on analyzing the risk of post-vaccination myocarditis and pericarditis, two forms of heart inflammation. Both began detected at higher-than-expected rates after COVID-19 vaccination in the spring of 2021.

The team focuses on studying data from the Vaccine Adverse Event Reporting System (VAERS), a passive surveillance system co-run by the CDC and the U.S. Food and Drug Administration.

“The National Center for Emerging Zoonotic Infectious Diseases performed a search of our records that failed to reveal any documents pertaining to your request,” Roger Andoh, a CDC records officer, told The Epoch Times. The center is part of the CDC.

No abstractions or reports were available because “an association between myocarditis and mRNA COVID-19 vaccination was not known at that time,” Andoh added.

Both the Pfizer and Moderna COVID-19 vaccines are built on messenger RNA (mRNA) technology.

Reports of heart inflammation after COVID-19 vaccination were first made public in April 2021 by the U.S. military, which detected the issue along with Israeli authorities well before the CDC.

While Dr. Rochelle Walensky, the CDC’s director, said that month that the agency had looked for a safety signal in its data and found none, by the end of June CDC researchers were saying that the available data “suggest an association with immunization,” and in August described (pdf) the issue as a “harm” from vaccination.

The claim that the link wasn’t known “is provably false,” Barbara Loe Fisher, co-founder and president of the National Vaccine Information Center, told The Epoch Times via email. “Either the right hand does not know what the left hand is doing at CDC, or federal health officials are disseminating misinformation about what they knew about myocarditis following mRNA COVID vaccines and when they knew it.”

Sen. Ron Johnson (R-Wis.) said that the FOIA response “raises even more questions about the agency’s honesty, transparency, and use, or lack thereof, of its safety surveillance systems, such as VAERS, to detect COVID-19 vaccine adverse events.”

“I have sent two letters to the CDC about the agency’s inability to find records demonstrating its use of the vaccine surveillance systems. To date, the CDC has failed to respond to my letters,” he added.

“Apparently CDC needs to make a correction!” a spokeswoman for the agency told The Epoch Times in an email.

The agency is acknowledging that by June 2021, data began to indicate a link between the mRNA COVID-19 vaccines and heart inflammation, outlined that month in two presentations made to government vaccine advisory panels.

“Additional data accumulated in subsequent months, ultimately leading to the conclusion that a causative association did indeed exist. However, such a conclusion required time to accumulate and analyze data,” the spokeswoman said.

It remains unclear how the CDC looked for a signal in April 2021. The CDC has declined to provide any details.

The CDC’s records office did not respond to a request for comment.

The correction is the second time in recent weeks that the agency has backtracked on a claim.

Andoh in June told the nonprofit Children’s Health Defense that staff from the agency’s Immunization and Safety Office informed him that the agency would not perform data mining on VAERS, even though several CDC documents said the agency would perform the analyses.

Questioned about the matter, Dr. John Su, a CDC official, told The Epoch Times that the agency started performing the data mining in February 2021.

Noting the conflicting statements, Johnson wrote to Walensky asking her for answers. “CDC’s assertion and Dr. Su’s statement cannot both be true,” he said.