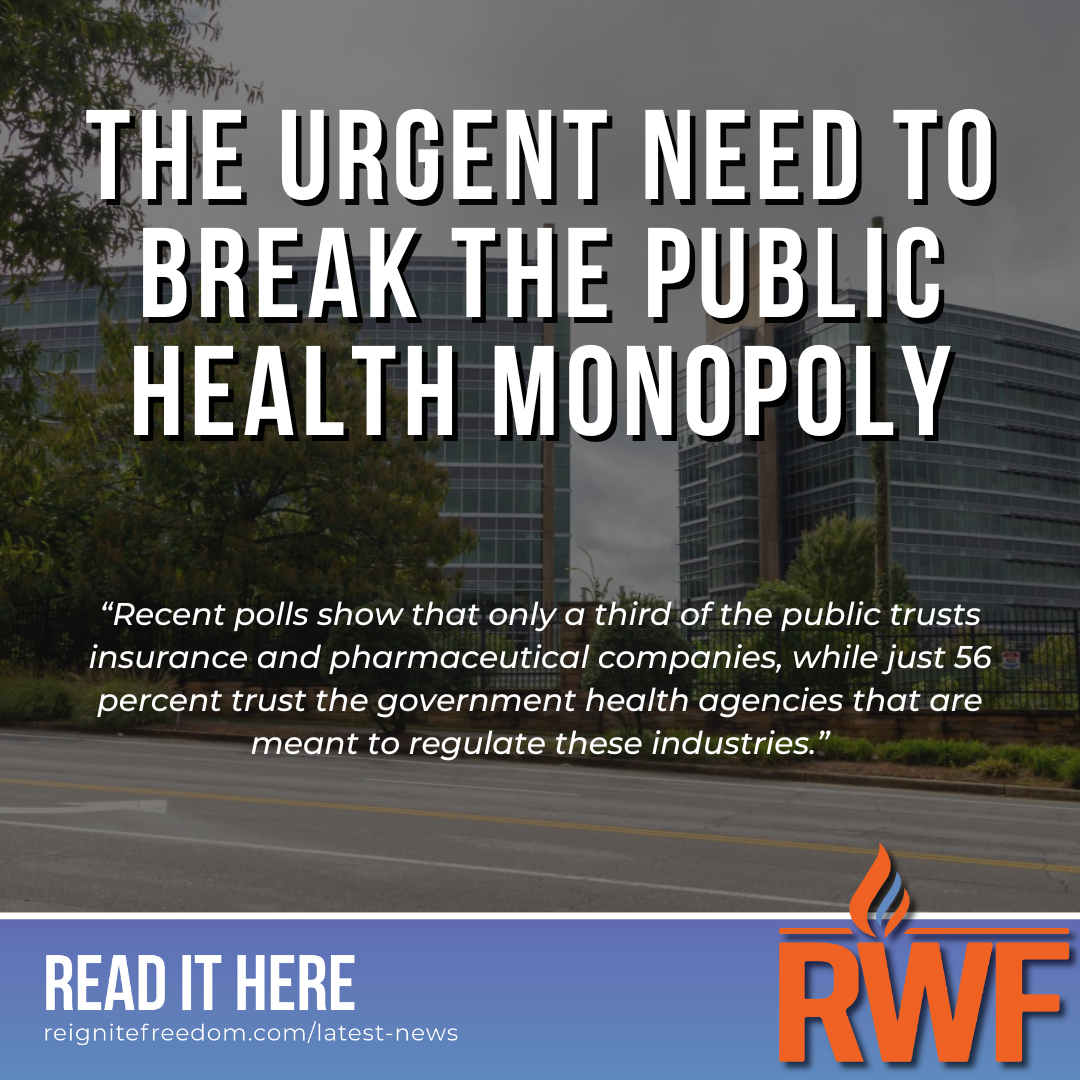 The Urgent Need to Break the Public Health Monopoly

Public health initiatives in the United States are suffering from a crisis of trust. Recent polls show that only a third of the public trusts insurance and pharmaceutical companies, while just 56 percent trust the government health agencies that are meant to regulate these industries. Another survey during the COVID-19 pandemic showed that only around half of Americans have a “great deal” of trust in the CDC, while a mere third have such trust in the Department of Health and Human Services.

This lack of trust is not merely temporary. Yes, our health agencies and companies have made mistakes and propagated falsehoods in the past two years. But their deep unpopularity is not merely the result of circumstance. Without alternatives, these institutions will always lack accountability, and therefore, trust. America is nothing without our unique history of popular sovereignty. We can no longer give public officials unilateral decision-making power over our public health response without competing voices, checks and balances.

Think back to late 2020. When the mRNA vaccines for COVID-19 were made available to the public free of charge, a national conversation began about “vaccine hesitancy”—the phenomenon of Americans choosing not to be vaccinated even when incentivized and, in some cases, coerced. Most of this conversation focused on the historic abuses against the black community, such as the Tuskegee experiment, that ostensibly engendered hostility to the vaccine program among African Americans.

This anecdote demonstrates how clueless public health authorities are about why they are distrusted. Vaccine hesitancy was not only an issue in the black community. Many who chose to forgo the vaccine made their choice based on the authorities’ very recent dishonesty, not a tragedy from decades ago. It wasn’t complicated. Americans had watched public health experts lie, misdirect, ignore evidence and yield to professional pressure since the beginning of the pandemic. Few wanted to be their guinea pigs.

Not all the COVID-19 gaslighting was the fault of the media or politicians—much was implemented by experts abusing their apolitical position of trust. When the first infections started to occur in the United States, public health experts strove to convince the public that President Donald Trump‘s plan to close the border was unnecessary—and successfully convinced President Joe Biden that it was xenophobic. Trump’s criticism of the World Health Organization and others for hyping the danger of COVID and shielding China’s Wuhan Institute of Virology from scrutiny turned out to be correct. But the public health establishment hid the truth about the virus.

None of these crimes against the American people should have happened, but the failures of the past two years cannot be ascribed merely to individual bad actions by unscrupulous bureaucrats like Fauci. The entire concept of a government monopoly on public health makes such misconduct inevitable. This is a problem that can be solved by introducing real competition and accountability, even if we must look outside government to get it.

In the Fall of 2020, a group of like-minded scientists, policymakers, health care workers and other public figures signed the Great Barrington Declaration, which pointed out the flawed reasoning and perverse incentives of the public health industrial complex and its response to COVID-19. Because of the vice grip that bureaucrats like Fauci held over the industry’s research funding and reputation control, these courageous men and women risked—and in some cases, wrecked—their careers by doing so.

Since the Great Barrington Declaration was signed, every single concern and recommendation it listed has been abundantly vindicated. It warned of the mental health crisis and increased deaths from injury and preventable disease that would result from lockdowns. Its claim that COVID-19 was a thousandfold more dangerous to the old and infirm is now common knowledge. Its focused protection approach to nursing homes could have saved countless lives from the callous actions of governors who subsequently came under investigation, like Pennsylvania’s Tom Wolf and New York’s Andrew Cuomo.

Because of these facts—which eventually escaped the web of censorship and obfuscation—former Indiana attorney general Curtis Hill convoked the citizen-led project America’s Grand Jury, a controversial attempt to publicize the public health establishment’s legal and scientific malfeasance. Of course, this effort has been branded a conservative political stunt, but is there any alternative for citizens demanding accountability? The goal of public health experts should not be to silence dissent of this kind, but to welcome it and encourage it to be as professional and accurate as possible.

Critics of the pandemic response like the Barrington signatories and America’s Grand Jury show that there is room for civil society initiatives and democratic oversight. In 2020, these competing voices were simply not strong enough to make themselves heard and convince policymakers to reject misleading analyses. Few were willing to do so, and those who did, like Florida Governor Ron DeSantis, did not have the support of any major research institutions backing them up.

Before the next public health crisis, we need to create a fair, forward-thinking, and reputationally robust institution to serve as a non-governmental alternative and foil to federal bureaucracies like the CDC. Privately funded laboratory research, an alternative framework for reputation analysis and peer review and influence-free conclusions could revolutionize the political approach to health and safety. Ideally, such an institution would be a gathering-place for those experts like the Barrington signatories who stood against the tide and prioritized real science over politics.

Like the school choice movement in education and public-private partnerships in transportation or tech, establishing new institutions devoted to data-gathering and health recommendations is of critical national importance. We need to unleash the power of competition and empower debate.

Most of all, we need to expose when the “experts” are wrong, so that we can achieve our goals through trial and error—the core of the scientific method. Unless we can create a new means of decision-making in public health, we’re doomed to repeat 2020 over and over.